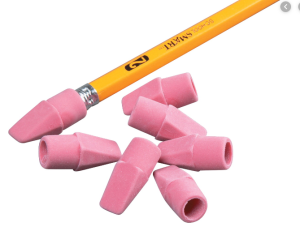 And it went so well with my Eraser Manifesto from NaPoWriMo 2019 called "Erasing Labor."

“The daughter made herself
an expert in the illness, to erase it
on its own terms: still it stayed, it grew, and as you know
the eraser soon starts disappearing.”
-- Albert Goldbarth from “Not Sumerian”

Years ago I began an eraser manifesto
for a collection of my erasers,
all with their soft curves and rolling debris,
all kinds of shapes and function,
those perched atop pencils
and novel, freestanding monuments.

The manifesto is short enough
to be erasable and reads as follows:

Erasers acknowledge, accept and accommodate the idea of failure.

Erasing destroys the eraser.
This has ramifications in social relations.

Corollary of above: to love an object too much
renders it un-usable.

It’s fun to erase but also fun to resist erasing.
And this too has ramifications in social relations.

The prompt for that day was to “write a poem about a dull thing that you own, and why (and how) you love it.” The quote is from this poem: https://www.vqronline.org/not-sumerian

Posted at 08:19 AM in Lifestyles of Poets | Permalink