A Book About Nursing Home Life 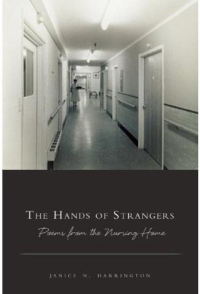 I was at my nephew’s graduation in May and picked up this book, The Hands of Strangers by Janice N. Harrington.  Harrington is a faculty member at the University of Illinois.

Some people I know visit college bookstores for the sweatshirts. This inspired me to collect local poets from college bookstores. U of I was the first college bookstore I’ve been to that did not have a Faculty/Staff book shelf. However, a very friendly book store staff member wandered the whole store to locate books for me by local authors. This book was one of them.

The subtitle of the book is “Poems from the Nursing Home” And as I had just finished “Being Mortal” by Atul Gawande, this book seemed interesting. What should you focus on as you approach end of life? How can you age well?

This was one of those books I would recommend to everybody. Who doesn't wonder what the end will be like? Who hasn't had a loved one situated in a nursing home? Who wonders if they too will end up in a nursing home one day?

Reader beware: it can be sad and disturbing, not just living with professional caretakers but the war your body wages with itself.

In the first section I wasn't very engaged. The book is told in first-person-removed on a theme. I thought, eh. Poems were about the daily routines like bed checks and some of the characters of the patients. It's a mild introduction.

But then the second section was a quick decent into the perils of living haunts and end of life drama.  Here's a good sample poem called “Rot.” The poem  “Two”was a sweet poem about friends helping friends. “Reality Orientation Therapy” was about the almost stream-of-conscious absurdity of the attempt to reorient disoriented patients. One of my favorite poems was “Mary Engles” about a woman with nobody to grieve her passing,  a poem inspired by an aide's note after her death: “No book will give her a sentence.” The poem “The Way it Ends” is a heartbreaking romance poem about two married people facing death in the same nursing home.

And then section three is even more harrowing. It's about "rough hands" and not-so-nice nurses and aides. It's also about the failures of the body, like this one, “Mending Wall” about skin and its failures. The end of the poem is downright eerie and yet beautiful.  “Friction’s Flowers” is a poem about bruises.

The Fourth section goes deeper into the body’s violence against itself. “Chart” describes what we’re reduced to as a medical file and “The Divider”  is an unforgettable poem about the final departure.

She ends with an epilogue of self-assertion, which brings to mind the adage: "As I am, you will someday be." It's a riveting depiction of Dylan Thomas' "don't go gentle into that good night."

Harrington finds surprising eloquence about things like bed sores. She also touches upon class and race and the characters behind care-taking work. She unflinchingly describes what dying is, and illustrates all the perils of the system: including rape, elder abuse and the tactile mess of the job. The worst of it is the indifference. She looks hard for any situational beauty and uses language in amazing ways to show you what happens in a nursing home.