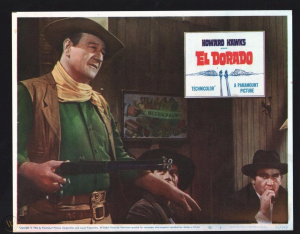 I feel somewhat of an anomaly: a fan of movie westerns who is ambivalent about John Wayne. I prefer Sergio Leone movies and their offspring for their complexity and visual sweep. Also, Wayne seems to me a bit of a water barrel with legs.

Anyway, I came across this article about him in The Atlantic from a 2017 stack I'm working my way through: "How John Wayne Became a Hollow Masculine Icon, The actor’s persona was inextricable from the toxic culture of Cold War machismo" by Stephen Metcalf.

The article is pre-me-too by a year so it's not about mansplaining or questionable sexism. It's more about John Ford and how their relationship led to a toxic kind of iconography.

"...from the bulk of the evidence here, masculinity (like the Western) is a by-product of nostalgia, a maudlin elegy for something that never existed—or worse, a masquerade that allows no man, not even John Wayne, to be comfortable in his own skin...There was an awful pathos to their relationship—Wayne patterning himself on Ford, at the same time that Ford was turning Wayne into a paragon no man could live up to."

This, I thought, was a brilliant assessment of where were now:

"Schoenberger herself alludes, perceptively, to “functional masculinity,” and if I read her right, this is the core of her provocative argument. Masculinity as puerile male bonding, as toxic overcompensation and status jockeying—this is what’s unleashed when masculinity no longer has an obvious function. Divorced from social purpose, “being a man” becomes merely symbolic. So, for example, robots in factories and drones on the battlefield will only make gun ownership and mixed martial arts more popular. To push the thesis further, as men become less socially relevant, they become recognition-starved; and it is here that “being a man” expresses itself most primitively, as violence."

Does that sound a little like the Incel violence we've been dealing with?

In other news, Cowboy Meditation Primer, has been named finalist in the New Mexico/Arizona Book Awards. Winners to be announced at a ceremony in early November.

Posted at 03:13 PM in Lifestyles of Poets, Poetic Realities, Whole Life of the Poet | Permalink