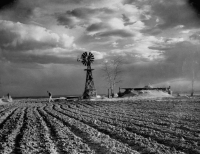 My Aunt Jane, who lives now in California, is over 90s years old and has written her life story, a lot of it near Roy, New Mexico, (along with maps!) and I'm really enjoying reading it. Last night I was reading her reference to "dirt farms." She said when she was a kid and her family moved back to Mills, New Mexico (near Roy), in the 1920s they bought a dirt farm, what they sarcastically called a farm there up on the mesa. Because they had to try to farm dirt. Northeastern New Mexico is famously failed homestead country, now ranch lands. It's unfarmable due to lack of water. But how sweet that this week's prompt references the broom being identical to the dirt.

We are the dirt farm.

"Originally there's
No dust to sweep off:
The mind of the person
Who holds the broom is
Exactly like the dirt."
- Shunryu Suzuki

A slope in the fields
Rocky loam, lines of strata
Sand slips from head to heart

Oh this makes housekeeping so much easier. :-)

I seem to love the little sprout of grass on a hill. I keep doing it. And I keep making it my little crop of hair on a head. I wonder what that's about? I love the idea of a dirt head. Dirt is great! Full of amazing smells and textures and sounds. Yes, that is what thinking is too!

Posted at 10:05 AM in Lifestyles of Poets, Poets in Action | Permalink