This is a movie about France's most celebrated writer, Sidonie-Gabrielle Colette, and how she climbs out from under her famous Claudine books which appeared under the pseudonym of her husband. This might remind you of the recent movie Big Eyes about Margaret and Walter Keane and a similar husband's swindle on his wife's intellectual capital, but in this case we're talking about a bigger allegorical story of female emancipation in writing, sex and self-sufficiency. The movie stars Keira Knightley and Dominic West as the power-writing couple and also includes Eleanor Tomlinson playing a Southern-speaking American. The movie is, in many ways, about sexual exploration and there are sex scenes between West and Tomlinson, Knightly and Tomlinson and Knightly and Denise Gough who plays Colette's longtime lover Mathilde de Morny.

But there's also plenty of writing and watching Colette struggling with writing, being forced to write, thinking over what she'll write, editing her writing with the help of her husband who taught her everything he knew. Like Cher claiming there would be no Cher without Sonny, Colette appreciated the support her husband provided as long as she could, until he got greedy. The movie's main focus is on the Claudine years and Colette's time as a stage performer. You also see how these writers dealt with the test of massive fame and commodification, how writing collaborations worked for them. The movie also goes into marketing and the legalities of publishing at the time.

I wish the movie (already two hours) could have addressed her later years, when most of her solo pieces were composed and her fame was at its peak, if only to see reference to one of my biggest guilty pleasures, Gigi. 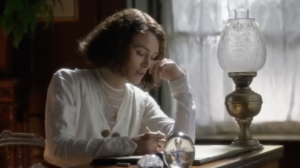 Tom and Viv is about another husband and wife collaboration team with Willen Defoe as the poet T. S. Eliot and Miranda Richardson starring his wife Vivienne. Unfortunately this movie is the dullest of the three. The young Willem does an excellent job playing the dull-sack Elliot, down to his droning boringness and weary incantations and Richardson does the best she can with the material of a stereotypical angry madwoman. But the movie is too long (again, two hours) and the the payoff is too little. Besides that, whole swaths of history were ignored completely. It's acknowledged that Vivienne helped Eliot write "The Waste Land" but the entire character of Ezra Pound was written out (gone!) to instead imply a strong writing relationship with Bertrand Russel.

And I just read a book about the subject, the literary year of 1922 when "The Waste Land" was written. The books, The World Broke in Two by Bill Goldstein, is a mini-biography of T.S. Eliot, Virginia Woolf, D.H. Lawrence and E.M. Forster, all struggling with the recent publications of Proust in English and James Joyce's Ulysses. The book goes into detail about Ezra Pound's contributions to Eliot's poem (Eliot himself confirmed it) and so although Ezra Pound is an unsavory character seen retrospectively, you can't erase him from the T.S. Eliot story.

You also can't go into detail about the health issues and mental problems of Vivenne (she was diagnosed with "moral insanity" but was was most likely bipolar) and completely not address the mental breakdowns and recurring health issues of Tom Eliot. What the hell? Not even mentioned that it was at a mental health facility where Eliot finished the bulk of "The Waste Land" or that he suffered from recurring depression after that. There's references to Tom's anglophila, his birthplace St. Louis, and scenes of him writing at a typewriter, but not that many. Here's a shot of the two collaborating over "The Waste Land." 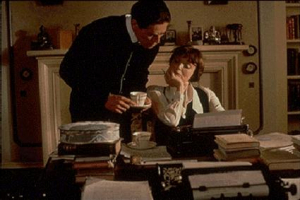 There is one funny line where Vivienne says, "Imagine Tom's poetry as a smashed vase" in an uncomfortable scene where Vivenne tries to explain Tom's poem to her parents. Haven't we all been there? There's another scene where Tom and Viv are proofing the typesetting for "The Waste Land" and they slightly touch on Eliot's theory that poetry should be an escape from emotion not an expression of emotion.

At the end of the movie Monsieur Big Bang expressed fatigue with seeing smart women depicted as mad women. I think this is actually one of the movie's points (as we end up feeling more sympathy to the rattled Vivienne than we do the emotionally impotent Eliot) but the movie takes too long to get to that end and withholds two much evidence that would have balanced out their relationship. 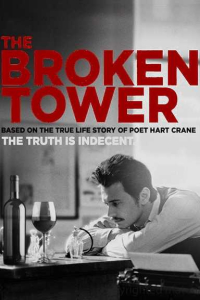 A good counterpoint to Tom and Viv is this James Franco movie. Franco gets a lot of crap for his affectations around poetry but he seems to know what he's doing. He both directs and stars in this movie about the life of Hart Crane, who is often seen as America's counterpoint to T.S. Eliot. Where Eliot saw modernity as profoundly disturbing, Crane found it inspiring. They both wrote very dense, difficult poems. But Franco takes the fragmentary nature of Crane's poems and tries to map them to an experimental film of fragments. He works with word associations in the various poems and tries similar techniques in this black and white film. It's not a comprehensive biography if that's what you're looking for; it's more alluding to his life story with chaotic camerawork and impressions of scenes, plenty of life gaps and moments of introspection.

In fact, Crane is never seen writing so much as thinking about writing, as the cover suggests. Or talking about writing as this memorable scene below conveys, where Crane tells a friend he wants to get "jazz and buildings into poetry," to "Whitmanize T.S. Eliot." And it's awesome to think of the convergence of those three poets: Crane, Eliot and Whitman. 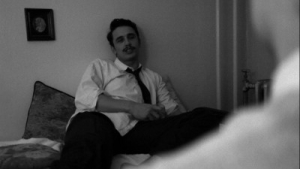 The movie also shows Crane's strained relationship with his father, a wealthy candy-maker and his struggles for money, including attempts to work a desk job.

We liked the movie so much we watched the DVD extras where Franco interviews Hart Crane scholars to talk about ways to make the poems come alive in film, including the cognitive leaps.

Posted at 10:59 AM in Poetic Realities, Poetry Technology | Permalink