« Intro to 52 Haiku | Main | Books to Read: Confessional to Experimental » 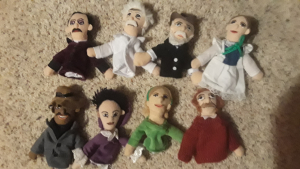 When I was in New York City recently I found a Walt Whitman finger puppet at the Museum of the City of New York. They're made by Magnetic Personalities and so I went online to try to collect more. They're finger puppets with little magnets in the backs of their heads. I’m trying to figure out how to get a fridge into my home office.

I had a real hard time choosing my puppets. There were so many, literally hundreds of writers alone! I decided to focus on American writers, and mostly poets or other writers who have inspired me. I wanted as many women poets as I could find. I also looked for puppets of color and there were only three (James Baldwin, Zora Neal Hurston and Langston Hughes), a depressingly small number.

Where’s Richard Wright? He’s one of my favorite writers.  I’m not a big fan of Hurston and I haven’t read enough of Baldwin, unfortunately. But I snapped up Hughes. I’m hoping more puppets of color are created, including some American Indian and Hispanic puppets. And more women.

They come with little mini cards that each include a photo, their dates of birth/death, one indicative quote and a mini-bio. So fun!

Synopsis of the ones I just purchased (in order of those pictured above):

Edgar Allan Poe
“The boundaries which divide Life from Death are at best shadowy and vague. Who shall say where the one ends and where the other begins?

His bio: Lifetime of disappointment, illness, poverty, mental anguish, dark genius, classic horror stories, helped define his genre, “his haunting poem of love lost, The Raven, is among the most famous in the world," father of the short story, the detective story "as well as an early innovator of science fiction."

Walt Whitman
“I celebrate myself, and sing myself,
And what I assume you shall assume,
For every atom belonging to me as good belongs to you.”

Mark Twain
“Against the assault of Laughter nothing can hold.”

His bio: "Led a life of adventure, both real and invented," Mississippi steamboat pilot, prospector, journalist, "humorous writings and flamboyant personality made him one of the most popular celebrities of his time," Mark Twain is a Mississippi river pilot term meaning two fathoms deep (12 feet), the depth required for a steamboat to navigate through.

Emily Dickinson
"As Lightning to the Children eased
With explanation kind
The Truth must dazzle gradually
Or every man be blind.”

Her bio: Brilliant, unconventional punctuation, poems have no titles, 2,500 poems survive and about 1,000 letters and her herbarium.

Langston Hughes
“I, too, sing America.”

His bio: A playwright, newspaper columnist, novelist, best known for his poetry, was the first African American poet to earn his living by writing and lecturing, was "discouraged by both black and white critics—for different reasons—but found his audience….”

Sylvia Plath
“I took a deep breath and listened to the old brag of my heart. I am. I am. I am.” –The Bell Jar

Her bio: Pulitzer Prize winning poet, semi-autobiographical novel, The Bell Jar has never gone out of print over 50 years.

Kurt Vonnegut
“So it goes.” –Slaughterhouse-Five

I love these little guys. And I guess this gives you something to aspire to. Someday I can only hope to be a finger puppet too.