Remember I was going to do a haiku challenge this year starting in June? WTF, 2018! Things just didn’t turn out as expected this year. But I’ve stayed on track with haiku meditations.

Wes Anderson released his beautiful Isle of Dogs this year. Fabulous animated version of a Wes Anderson movie (in look, humor and tone). I own the DVD. I have the giant poster. I wear the t-shirt.

But there were two satirical haikus to open and close the movie.

I turn my back
On human kind
Frost on window pane

And then at the end:

I loved it. I also tracked down Issue 47 of Rattle Magazine for its catalog of Japanese forms. In the back, there's an excellent dialogue on haiku between Timothy Green and Richard Gilbert. They specifically discuss Allen Ginsberg’s famous translation of the Basho frog in a pond poem, explicating its last line, “Kerplunk!” Gilbert says, “the wetlands of Connecticut have bullfrogs and they do kerplunk! And Allen’s from New Jersey and they kerplunk there, but in Japan they don’t kerplunk.” And he goes on to discuss why this translation, however charming, accidentally and significantly changes the meaning of the original poem by altering the size and sound the frog makes when diving into the pond. 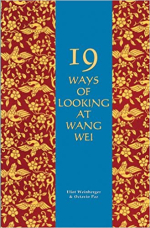 And I finally finished a book about translations of a Chinese poem by Weng Wei, 19 Ways of Looking at Wang Wei, How a Chinese Poem is Translated by Eliot Weinberger and Octavio Paz. This overpriced, 50-page book had been on my wish list for a while. And it was an interesting dissection of translation problems with examples of 19 attempts to translate a 1200-year-old 4-line poem that was part of a landscape scroll. The authors provide notes on the Chinese language and how word choice and meter may affect reading. They start with Ezra Pound’s contributions, explain transliteration (word for word or character by character) and then dive into translations chronologically by W.J.B. Fletcher (1919), Witter Byner and Kiang Kang-hu (1929), Soame Jenyns (1944), G. Margoulies (1948) which was French so even the translation needed a translation, Chang Yin-nan and Lewis C. Walmsley (1958), C.J. Chen and Michelle Bullock (1960), James J.Y. Liu (1962), Kenneth Rexroth (1970), Burton Watson (1971), Wai-Jim Yip (1972), G. W. Robinson (1973), Octavio Paz (1974), William McNaughton (1974), Francois Cheng (again French, 1977), H.C. Chang (1977), and Gary Snyder (1978).

Here is a succinct quote about the situation:

“…translations are relatives, not clones, of the original. The relationship between original and translation is parent-child. And there are, inescapably, some translations that are overly attached to their originals, and others that are constantly rebelling.”

But Weinberger and Paz were way too dismissive about the translations they don’t like and too laudatory over translations they themselves contributed. Their was a glaring unfairness built into the project: all the other translators didn’t nearly the same amount of space to describe their choices as the authors provided themselves. And then they used highly subjective judgement words like “dull.” They made inexplicable leaps, attributing to a translator “unspoken contempt for the foreign poet” if the translation stayed too far from the original. Weinberger and Paz called for the “dissolution of the translator’s ego” (as if such a thing were possible) all while ignoring the fact that their own statements were rife with ego. Later in the book they insist of Kenneth Rexroth that he “ignores what he presumably dislikes.” There's a shitload of presuming is my point.

“…taken from a three-volume set, all by the same translator, and published, oddly, by Columbia University Press...”

The fact may indeed be odd but you’d have to be an insider to understand why.

But there was a wonderful keeper quote from poet Gary Snyer:

“The point is that translation is more than a leap from dictionary to dictionary; it is a re-imagining of the poem. As such, every reading of every poem, regardless of language, is an act of translation: translation into the reader’s intellectual and emotional life. And no individual remains the same, each reading becomes a different—not merely another—reading. The same poem cannot be read twice.”

You can't dip your foot in the same river twice. The same poem cannot be read twice. Wow. Given that sentiment you’d think the authors would have been more open to the personalities of these translations that were different than their own.

I have read quite a number of article regarding translation, most of it translating English to mandarin. This is the first article that talks about translating poems . This is rather an interesting article for me. The mandarin poems sometimes sounds smoothly when read in Chinese and if it is being translated into English it may be able to achieve the same favor as it sound like when read in mandarin.

This will be something new for me to explore and learn for translation. I have been doing translation for website for English and Mandarin and I have always feels that this is a field that there will always be a gap that cannot be fully close between language and language translation in trying to convey and bring out the exact meaning that it is trying to translate.

My Hanyu Pinyin explanatory guide can be reach from this link
https://www.youtube.com/watch?v=aaj2NXHYJHE

And the website that offers the actual learning can be reached from http://www.englishtochinese.info/