The Map of the Cowboy Meditation Primer 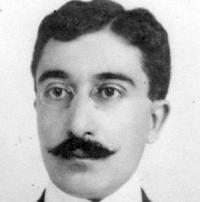 So I have been plugging away on my upcoming book project and meanwhile an unexpected work-life reorganization happened. It caused a definite shift in work-life and became an occasion to send to some colleagues the following poem I found around the same time written by Greek poet C.P. Cavafy:

As Much As You Can

And if you cannot make your life as you want it,
at least try this
as much as you can: do not disgrace it
in the crowding contact with the world,
in the many movements and all the talk.

Do not disgrace it by taking it,
dragging it around often and exposing it
to the daily folly
of relationship and associations,
till it becomes like an alien burdensome life. 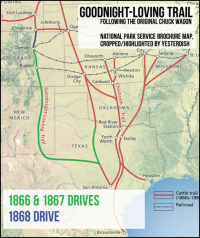 So I'm in the middle of processing the job changes and continuing to work on this book and working on NaPoWriMo poems. It's been very hectic and exhausting.

But here's my official book description:

It's the late 1870s and Silas Cole is a heartbroken journalist who joins a cattle drive in order to learn how to be a real cowboy. He meets a cattle company traveling up the Goodnight Loving Trail in New Mexico Territory. Not only do the cowboys give Silas a very real western adventure, they offer him a spiritual journey as well.

This book has been in progress over ten years. I started it shortly before I met Monsieur Big Bang while we were both still living in Los Angeles. The project started as an amalgamation of family history and the reading of (literally) 40 books on Zen Buddhism. Surprisingly, the family stories fell completely away and the set of poems became a fictional account of a cattle trail ride up the Goodnight Loving Trail, a few years after Charles Goodnight had stopped using it.

You probably know the trail and its cowboys, Charles Goodnight and Oliver Loving, from the famous miniseries, Lonesome Dove, based on the Larry McMurtry novel fictionalizing their experiences in the late 1860s after the Civil War.

I've discovered there are no good maps of the Goodnight Loving Trail, especially as it travels through the state of New Mexico. I've even gone to the Charles Goodnight museum in Texas and various museums of cattle history to try to find a better one. No dice. These two maps attached are the best I can find online.

The well-known portion of the route started in Texas and traveled to Fort Sumner, New Mexico, then up the mountain route of the Santa Fe Trail through Trinidad in Colorado and stopped initially in Pueblo and later went on to Cheyenne, Wyoming.

In the book he collaborated on with J. Evetts Haley, Charles Goodnight talks about an alternate route he used in order to avoid Uncle Dick Woottons pretty steep Raton Pass toll. Goodnight's alternate route veers off from Fort Sumner to the ghost town of Cuervo, New Mexico, up through what is now Conchas Lake and the famous Bell Ranch, up the mesa near Mosquero, New Mexico, and then up to the grassy plains around Capulin Volcano and through another mountain pass north of Folsom, New Mexico, (which is famous for prehistoric Folsom man and a famous flood where the switchboard operator died trying to save all the village people.)

My poems follow this alternate trail and swerve back to meet the original trail in Trinidad, Colorado. I'm not sure that's what really happened (Trinidad specifically). Goodnight's story is vague on that detail. But he does mention specifically the New Mexico locations of Fort Sumner, Cuervo, Fort Bascom, Capulin Volcano and Folsom. There's also a historical marker in Mosquero confirming the trail came through their town. In his book, Goodnight also talks about a hill that is probably located along the mesa that rises up from Bell Ranch to Mosquero, that particular hill having been named "Goodnight Hill" in his honor, but no local histories or local people I've asked have ever heard of a hill by that name.

Along with stories of the Goodnight Loving Trail, these books also contributed a great deal to the new poems: 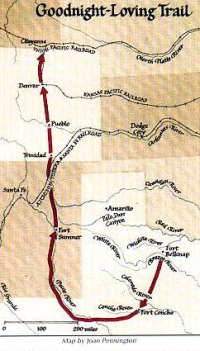 "The Prairie Traveler" by Randolph Macy, which was an official rewrite of the highly misleading and inaccurate book "Emigrants Guide to Oregon & California" by Lansford Hastings, more famously known as "The Hastings Guide."

"The Log of a Cowboy" by Andy Adams which was the personal story of one of the cowboys who allegedly traveled with Charles Goodnight.

The book's permissions are sorted out, the book has an ISBN number. The editor has come back with edits and the layout is pretty much finished, which always forces some pretty tough choices to be made around orphan, window and longer lines.

I'm waiting for the proofs to be sent out for blurbs and we're also working on the cover design and photos.

If all goes well, I'm hoping for a September publication.

Posted at 12:09 PM in Craft, Poetic Realities, Whole Life of the Poet | Permalink