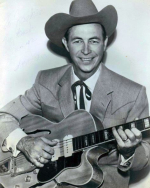 And then it sort of is.

Many, many years ago my parents gave me a notebook that had been my grandfather’s. It was full of pages of handwritten verses. My parents assumed these were poems and since I liked poetry, (and my brothers got the horse saddles and cowboy hats), they gave me the notebook. The notebook sat in a box for a decade or so before I decided to transcribe the verses. As I was typing them out, it occurred to me they might not be poems, or original poems anyway. My grandfather started his career as a forest ranger at Jicarilla, an Apache Indian reservation in northern New Mexico. He spent a lot of time on a horse out in the middle of nowhere. He had left his girlfriend, my grandmother, back in Roy, New Mexico. He had no cellphone, transistor radio or 78-record turntable to pass the time. I figured he was probably kind of stir crazy and writing down some poems or songs he liked to pass the time.

So I Googled a line or two. And bingo: they were all old songs (and a few odd pages from a Spanish class). I was able to purchase all the recordings from iTunes, all but one song which apparently hasn’t been recorded often, if at all. I picked either artists my grandfather might have known or, failing to find that, versions I liked. When I couldn’t decide, I added both versions. Then I sorted them into a mix I called the Burt Ladd Mix 1926 (or BLadd Mix) and gave it to my father for Father’s Day present in 2015.

I thought it would make a good playlist on YouTube and I’ve finally put it up. Some of the mariachi songs aren't the same versions I found on iTunes. Some of these old cowboy and mariachi songs are pretty famous, others more obscure. He probably became familiar with them from local traveling bands (Bob Wills started out in Roy, New Mexico) and from local parties and dances.

Other poetry projects and experiments on my YT channel.

Posted at 02:51 PM in Poetry Technology, Whole Life of the Poet | Permalink