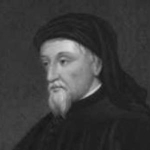 “Whan that Aprille with his shoures sote
The droghte of Marche hath perced to the rote,
And bathed ever veyne in swich licour
Or which vertu engendred is the flour…”

Prologue to The Canterbury Tales by Geoffrey Chaucer

Boy, spell check hated that verse. Literally, these are the lines that began English literature. I took a class in this book in college. It was required. But I have to say, the class was not as torturous as you might imagine. This is a story about a holy pilgrimage from London to Canterbury by 29 people who each get to spin a yarn along the way. It was funny and bawdy as I remember. Our teacher, on the other hand, was a stern old humorless bore. My Shakespeare teacher was a character herself. She was a veritable Shakespeare groupie who made her own pilgrimages to Stratford-upon-Avon and enthusiastically showed us her grainy snapshots. 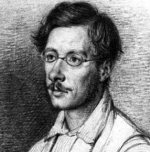 “There was an older person of Dover,
Who rushed through a field of blue Clover;
But some very large bees stung his nose and his knees,
So he very soon went back to Dover.”

According to the card, Lear “made the world safe for the limerick.” These are just nonsensical party games that were written to the grand-kids of his patron. They even came with comic graphics.

“And far into the night he crooned that tune.
The stars went out and so did the moon.
The singer stopped playing and went to bed
While the Weary Blues echoed through his head.
He slept like a rock or a man that’s dead.”

“The Weary Blues” by Langston Hughes

According to the card, one of the “masterpieces of the Harlem Renaissance” in the 1920s.  Hughes spent his career perusing an authentic African American voice," one infused with the syncopation and stylings of black music; jazz, gospel, and blues." I've been collecting poems about dictators on my website and on Facebook. By far the biggest response I've received has been for excerpts of Hughes' poem "Let America Be America Again."

Posted at 03:13 PM in Today's Pillar of Poetry | Permalink