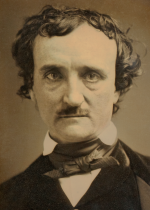 "Once upon a midnight dreary, while
I pondered, weak and weary,

Over many a quaint and curious
volume of forgotten lore—

While I nodded, nearly napping,
suddenly there came a tapping,

As of some one gently rapping,
rapping at my chamber door.

“The Raven” by Edgar Allan Poe

I did not plan this card to fall in the last set for a Halloween post. I swear. These cards were picked completely randomly. I even purchased a dollar store tombstone for my office this month that says "never more."

Edgar Allan Poe had a rough life. He was “orphaned and destitute” in childhood and taken in by the Allan family of Richmond VA. From them he received a good education but he had health problems and came across as dark and destructive. With his “macabre tales" he "pioneered the modern detective story.” He is widely known for “The Raven” but this composition was the beginning of an unstable end.

“Had we but world enough, and time,
This coyness, Lady, were no crime.
We would sit down and think which way
To walk and pass our long love’s day…”

The last card of 48, “To His Coy Mistress” by Andrew Marvell.

When you look up the poem, the second paragraph goes on to say...

"But at my back I always hear
Time’s wingèd chariot hurrying near;
And yonder all before us lie
Deserts of vast eternity."

And this reminds me of a category of pop songs I dub the "Go All The Way" songs (after the Raspberries) that have been produced ever since.

Marvell was apolitical and pastoral while he was tutor to a lord’s daughter. Later, he became a "vicious political satirist and defender of John Milton and Oliver Cromwell" and an influential member of [British] Parliament.

Not a lot of diversity here but this is an older deck. I have a feeling a 2017 deck would rob less from the canon and more from women and people of color. Measly lack of women, especially British women from what I'm still convinced is a British deck, but many American women (almost half). The majority of poems are from the last two centuries which is understandable considering most people claim to be allergic to moldy old poems.

Posted at 10:17 AM in Poetic Realities, Today's Pillar of Poetry | Permalink