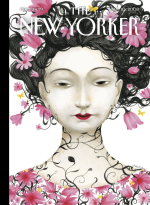 I’ve always been a very slow learner. It took me a long time to learn to tie my shoes, use a zipper, tell time on anything non-digital, read, figure out what boys wanted, crack the mysteries of office politics. Really painfully slow.

But, and this is a big but, when I figure things out sudden enlightenment comes like a big aha and I go from the bottom of the hill to the peak instantaneously. I’m in remedial reading one day and not improving and then I’m in National Honors Society the following Tuesday and all my brainiac friends are like “WTF are you doing here?”

Okay, so tying my shoes is a bad example. I still can’t really do that very well. But in general I spend a lot of my time confused and in the dark and then…bingo….I get it.

And The New Yorker Magazine is another example of this. When I was at Sarah Lawrence all my writer friends seemed to be reading The New Yorker. I tried it then but there weren’t enough pictures. The text was oppressively text-y. The poems seemed obtuse. I even tried multiple times over the years since then. If some pretentious person had the magazine displayed prominently on their coffee table or if my writer friends still were subscribing, although always with the comment, “I love this magazine but I never have time to read it.” And then recently at CNM even my coworkers were talking about it and sharing links to it. Huh. What is wrong with me? You can’t force these things.

But suddenly in 2016 I was offered a deeply discounted short subscription to the magazine through the college and I’ve been glued to it ever since. All the other magazines coming into the house, (I’m being gifted quite a few right now), are being literally ignored, except for the celebrity rag I’m reading in the bathtub because I don’t care if it gets wet. I even stopped my subscription after 6 months because I was feeling anxious that it would take me two years to get through just 2016 issues and  I didn't want to miss anything. So I cancelled it because I liked it.

My favorite articles are pieces about visual artists and writers. There have been three good articles on poets and writers so far.

Insurance Man: The life and art of Wallace Stevens

Like The New Yorker, I’ve often tried to like Wallace Stevens. People I know who love Wallace Stevens love him very passionately. They work hard to understand the poems and they feel like extra time is worth it. Two classes I've recently taken in Modernism helped me find a few poems to get into, my favorite is probably "The Man on the Dump." But I’m not rushing out to find any Wallace Stevens books. This book review didn’t really change that feeling but it was very interesting for two reasons:

For uncovering his political beliefs:

“Stevens made haplessly clumsy allusions to social and political tensions of the time, though he was “a Hoover Republican,” Mariani writes, and also an admirer of Mussolini for rather longer than is comfortably excused as a common myopia of the time. He was no better than most white men of his class in point of casual racism and anti-Semitism, though fewer such toxins leak into his poetry than into that of Eliot or Pound. In verse, Stevens transcended anything mean or petty in himself, but for art’s sake; he wasn’t much given to moral scruple."

And his office personality:

“Stevens continued to go to work each day into his seventies, even after surgery for a stomach obstruction revealed a metastasizing cancer. He was too august at the firm to be let go, but he was never popular there. His boss remarked, “Unless they told me he had a heart attack, I never would have known he had a heart.”

This was another good piece of biography which also covered the reasons why Goethe isn’t so popular now with English-speaking readers, possibly due to his obsession for leading a mentally healthy life. That sort of impulse is not very en vogue with us this century after we re-imagined our judgements about mental illness. In our time, artistic madness is appreciated, the whole “living on the edge” thing. The author compares the sentiment around madness before and after Beethoven, a contemporary of Goethe, came on the scene. Fascinating.

Another good one in these times of political anxiety: Adrienne Rich’s Poetic Transformations.

Like Wallace Stevens, I’ve also struggled to connect with Adrienne Rich, although I appreciate writers' appreciation of her. I had a book signed by her once at The Dodge Poetry Festival back in the 1990s  and she seemed a bit stern and cold while signing books. But coming across Rich in continuing education courses keeps me trying.

Someday I’ll get it.

Posted at 10:48 AM in Books to Read, Lifestyles of Poets | Permalink