I took the summer off (my parents visited for five weeks) but I kept going through the poetry cards so we can finish the last few posts this year. 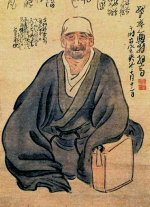 "Not knowing
The name of the tree,
I stood in the flood
Of its sweet smell.”

Matsuo Basho from “The Narrow Road to the Deep North”

Known to be the greatest of the Japanese haiku poets, Basho was influenced by Zen Buddhism and wanted miniature perfection in a poem. This required only seventeen syllables broken into sections of 5-7-5. In later years, he journeyed through Japan doing travel sketches tied together with his haiku. When translated, the poems lose their original syllable configuration.

“A Poem is a City” by Charles Bukowski

I love how these poems bump up against each other. Two travelers, two poems. The card talks about Bukowski's “pure, undiluted voice from the street, attached to no school, tradition, or ideology save that of day-to-day survival.”  The “unflinching honesty” of his poems dealt with bus terminals, boarding houses and racetracks. The movie Barfly was based on his writings. There's also a very cool database of his work. 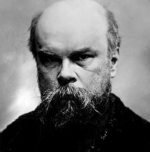 "Like a clamorous flock of birds in alarm
All my memories descend and take form,
Descend through the yellow foliage of my heart
That watches its trunk of alder twist apart,
To the violet foil of the water of remorse
Which nearby runs its melancholy course…"

Paul Verlaine’s “The Nightingale” (a video and alternate translation)

The card says his credo was “music before all things” and he spent a life of rages, romantic obsessions, alienation, and prison time for shooting Arthur Rimbaud (see the movie Total Eclipse or Big Bang Poetry's review) because he was full of “inner turmoil.”

“He disappeared in the dead of winter:
The brooks were frozen, the airports almost deserted,
And snow disfigured the public statues;
The memory sank in the mouth of the dying day.
What instruments we have agree
The day of his death was a cold dark day.”

Auden emigrated to America, the card said. This was my first clue (aside from the stats below) that this is an English deck.  Auden's famous saying, “poetry makes nothing happen” was misunderstood and what Auden meant was "that poetry had no hand in the evil events taking place in Europe at the time---the rise of fascism in Spain, Italy and Germany and the impending war." He meant instead that poetry was “a way of happening, a mouth.” If you understand that, let me know. I'm still having trouble with it. 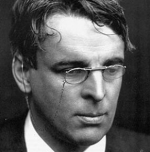 “Things fall apart; the center cannot hold;
Mere anarchy is loosed upon the world,
The blood-dimmed tide is loosed, and everywhere
The ceremony of innocence is drowned;
The best lack all conviction, while the worst
Are full of passionate intensity.”

“The Second Coming” by W.B. Yeats

Ireland’s greatest literary figure, says the card. Yeats was a collector of folktales and legends, a senator and a self-styled oracle. This poem was his reaction to the Black and Tan War in Ireland where British troops came to quell an uprising. 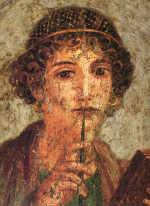 “If I meet you suddenly, I can’t
speak—my tongue is broken;
a think flame runs under
my skin; seeing nothing,
hearing only my ears
drumming, I drip with sweat;
trembling shakes my body
and I turn paler than
dry grass…”

Sappho was from the Greek island of Lesbos and was the aristocratic head of a poetry school. She was once as famous as Homer. She was allegedly bisexual and her love poems were “meant to be sung in the Mixolydian mode she invented.” 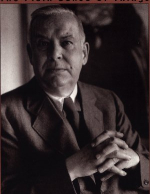 “Call the roller of big cigars
The muscular one, and bid him whip
In kitchen cups concupiscent curds.”

From “The Emperor of Ice Cream” by Wallace Stevens

This was a jarring paring against Sappho! Stevens was an American modernist and insurance executive. “Stevens chose to lead a life of quiet middle-class conform in order to make room for his real vocation, poetry.” His first book was published when he was 43. He wrote that this poem had “something of the essential gaudiness of poetry…obviously not about ice cream.”