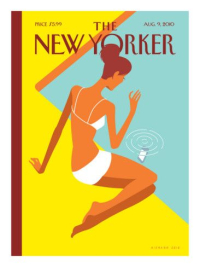 I’ve been investigating electronic poetry and I’ve started tracking my favorite pieces on this list. I’ve broken up them down into auto-generated, visual poems, video things, apps, and interactive.

This summer, a story about auto-generation came out that might disturb some of us. There’s this thing called a Bot Dylan, inspired by you-know-who, that creates machine-generated melodies. Scary thought. And I know auto-generation makes everyone (but auto-generation artists) a little anxious.

But I wonder if it’s really that much of a threat. My Dad and I have this ongoing argument about it. He worked with computers vocationally, (both fixing IBM machines and programming them) and he often thinks about them often conceptually, especially the new artificial intelligence developments with smart phones and Siri.  Does he think auto-generated art will ever replace human art?

I, myself, don’t think it will, (even if it turns out to be well made and aesthetically interesting), just for the fact that we go to human-generated art for the main purpose of connecting with other humans, to hear what other humans have to say about the experiences of being human. If we wanted to know what it felt like to be a machine, we'd ask a machine. It doesn’t matter what the machine is saying. We want a human to be saying it. This is why we feel anxiety around it.

However, my Dad is not so sure and he’s a pretty smart guy so we should probably keep tabs on the situation.

“We didn’t expect any of the machine-generated melodies to be very good,” Dr. Oded Ben-Tal, a music technology expert at Kingston University in London, told The Daily Mail. “But we, and several other musicians we worked with, were really surprised at the quality of the music the system created.”

Of course, electronic literature is technology dependent. Which is a real bummer sometimes. My Kindle keeps freezing on me at lunch and I can’t even read when my Kindle's batteries are dead. I was reading one book the other day and the Kindle crashed and I lost all my underlining. Which was copious! That shit doesn’t happen with paper books. They’re always charged and you never lose your marginalia unless it catches on fire or you accidentally throw it in a river.

eLit is also often very complex, cerebral and meta. I actually like that about it. But a lot of effort goes into making eLit pieces: coming up with a new ideas, programming the thing, distributing it, keeping it from becoming technologically outdated. They are very labor intensive projects.

In contrast, you have the haiku. It’s tech free and very simple to write and comprehend. You only need a piece of paper and not all that much ink. Haiku is also something you can tie to your meditative practice. Haiku can be healing and calming. You can spend all your time creating haiku on a train, in a park or on top of a mountain. In contrast, eLit requires some kind of computer and the whole thing might give you carpel tunnel.

I spent the summer with these haiku books:

One Hundred Frogs by Hiroaki Sato (1983)

I bought this book used at the 2016 Los Angeles Festival of Books. It’s a collection of translations and re-tellings of the famous Basho haiku about a frog jumping in the water. The book is also a flip-book of sketches of a frog jumping into a pond. I enjoyed the marginalia from the prior reader and tended to like the same meta poems that this person put smiley faces next to.

And it was very meditative to read the same poem written a hundred different ways, as well as a good lesson in various writing styles: couplets, sonnet, limericks, concrete versions, word-for-word translations, transliterations and trans visions (still learning what those are). Basho did his own elongated version, Allen Ginsberg uses the great word “Kerplunk!," one version explicates the poem in terms of samsara, satipatthana and nirvana, one is a pre-modernist variation of formal poetry, one is done in overwritten prose. 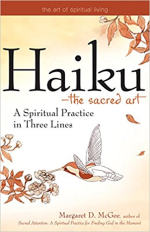 I also found this on sale at the 2016 book festival. I was reading it with my friend Natalie as part of a healing haiku project we were doing. I finished it recently as part of ArtBrawl political haiku project we started and never finished. The book is a real fusion between Zen, Christianity and a writing guide.

I was at first put off by the biblical passages, feeling it didn’t jive fully with the Buddhist lines. But I started to appreciate McGee’s intention and her wide knowledge of haiku and its connection to Zen Buddhism, and also her willingness to incorporate them into another paradigm, Christianity. She writes from a place of openness and her church seems very inclusive. It’s a short book with haiku exercises and it often explores the spiritual and healing aspects of haiku. She provides both self and group exercises. 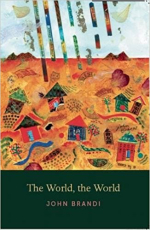 I got this book in Santa Fe and it has a good collection of haibun poems. Haibun, a cousin of haiku, are comprised one block of prose followed by one haiku. I did a bunch of them once on a Georgia O’Keefe Museum writing retreat near Abiquiu, New Mexico, and they were fun to do.

Brandi is a local author and his book includes poems about hiking in Northern New Mexico. He also writes poems about Zen. One poem plays with the idea of hiking as opposed to spending time on LinkedIn. Brandi is also a painter and there are some poems about painting and art culture.

The second half of the book is where Brandi visits Tibet and India and...they become travel poems. Travel poems are always problematic. They’re a drag to read (unless you’ve been to the location yourself) and I think this is because travel poems are essentially not about the place at all but about the experience of traveling. And almost always these poems are devoid of any self-deprecating humor. They’re overly serious and posturing, even when the poet tries really hard not to be. Somehow they’re like 1950s slideshows that put your parents' friends and relatives to sleep. Poets make great pains to try to avoid this, especially if the trip sounded expensive. They try not to sound like they’re bragging subconsciously about their amazing time and transformative journey. (I attempted a satire of this type of poem in Why Photographer’s Commit Suicide.) Poets are usually self-conscious around issues of privilege and so they try to spin their travel poems in ways to make them sound more like pilgrimages, like there is some kind of universal spiritual experience to justify the poem’s existence. But it never comes across. It always feels contrived.

A good anecdote to this situation would be…a sense of humor, maybe even a self-deprecating one. Humor would make an emotional connection with the reader that would offset the travel-bragging thing. But unfortunately there are some poets, particularly travel poem writers, who are loathe to add any humor into their poems because of a highbrow belief that humor is a cheap strategy or a lesser form of language.

Which has always mystified me because I was raised to believe humor was a higher level of thinking, elevated conceptually and more difficult to devise. It was right up there with logic puzzles and math for my peeps. So to go out into the world and find out “comedy” was a "lesser than" art – this was a shocking eye-opener for me and I have tended to gravitate toward funny writers. I've been lucky because there are plenty of GenerationX writers who specialize in melding highbrow fiction with funny.

In my experience it takes a sophisticated and agile intelligence to be funny. It takes an ability to see the world from other level in the matrix and then to skillfully perform language in a timely way that invokes laughter. It’s hard to do, and I think this is why many writers disparage it. Humor can also disguise great hatreds and aggressions. It can be pretty violent. And likewise, it takes a certain smartness to perceive when that aggression is actually occurring. We don’t say jokes are “over someone's head” for no reason.

So I’m always on the lookout for what academic poets have to say about the craft of funny. I recently read Louise Glück’s new book American Originality: Essays on Poetry. (I’ll do another review of it separately because I have so much to say about it). But in one of her essays, she marks similar anecdotes for the narcissism of confessional poems:  modesty, detachment and humor. She singles out Mark Strand as an example of humor, but she makes sure to note: “not to say he has turned himself into a comedian.” Because that would be bad. A "comedian" is lesser than a serious poet.

And another strange thing about comedy, there are quite a few comedians who hate to explicate the language of comedy. They’re not that dissimilar from poets who hate to explicate poetry (Albert Goldbarth). However, language nuts do like to do this because we like to dissemble sentences to see how language works. So I’m also fascinated by scholars of the funny. 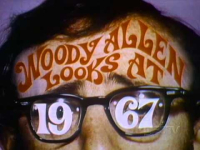 We’ve studied our anger, we’ve studied our guilt. Humor is so much more mysterious. Philosophers have studied humor, including Plato and Aristotle. There was a superiority theory, Freud’s relief theory, the incongruity theory (the unexpected funny). Some reading I was doing for work led me to this very interesting Slate essay on theories of funny including the benign violation theory which addresses angles of comedy that even baffled Aristotle. The essay includes this funny video example to prove one of their theory.

I found another very great intersection of poetry and comedy while watching the TV special Woody Allen Looks at 1967. You can see the full show here.

Fast forward to minute mark 41:50 where there’s a very funny Bonnie and Clyde satire with Woody Allen, John Byner and Liza Minnelli. There’s a short exchange about poetry between Liza Minnelli and John Byner at mark 47:45. It’s not all that long but it explores our ideas of poetry, class consciousness concerning the lowbrow and the highbrow and it does this all within a joke that last less than a minute. Pretty smart.

Posted at 11:25 AM in Craft, Lifestyles of Poets, Poetry Technology, Whole Life of the Poet | Permalink