Continuing in 2017 to work through the Poet’s Corner card deck series.

“She has laughed as softly as she sighed.
She has counted six and over,
Of a purse well filled, and a heart well tried—
Oh each a worthy lover!
They ‘give her time’; for her soul must slip
Where the world has set the grooving:
She will lie to one with her fair red lip--
But love seeks truer loving.”

Elizabeth was popular before she met Robert Browning and Edgar Allen Poe dedicated a book of verse to her. He called her “the noblest of your sex” which she seemed to find stupid, responding “Sir, you are the most discerning of yours.” She suffered a spinal injury at 15 and waited through three years of letters before agreeing to meet Robert Browning. This poem is described on the card as sardonic and the poet as before her time. 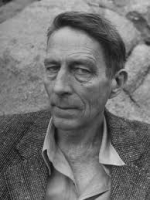 "Sports and gallantries, the stage,
the arts, the antics of dancers,
The exuberant voices of music,
Have charm for children but lack
nobility; it is bitter earnestness
That makes beauty; the mind
Knows, grown adult."

“Boats in a Fog” by Robinson Jeffers

An American poet who “celebrated strength, self-reliance and other heroic virtues, ” Jeffers lived at Hawk Tower in Carmel, California. Ghost Adventures visited the location a few years ago. I blogged about the episode. The card calls him “completely out of step with his times.” His epic, biblical poetry is “not only difficult to anthology but can also test a reader’s endurance.” He was also full of “antimodern rhetoric" and this poem is about classical arts vs “the vulgarities of contemporary popular culture.” Not too surprisingly, Jeffers became a recluse at the end of his life.

"Though much is taken, much abides; and though
We are not now that strength which in old days
Moved earth and heaven, that which we are, we are,
One equal temper of heroic hearts,
Make weak by time and fate, but strong in will
To strive, to seek, to find, and not to yield."

The card quotes Edmund Gosse to say “ No living poet has ever held England…quite so long under his unbroken sway.” He experienced enormous fame and was Poet Laureate for 40 years, originally designated by Queen Victoria.

So National Poetry Writing Month (NaPoWriMo) is in full swing this April 2017 and I’m doing the daily prompts this year. You can read them at https://hellopoetry.com/mary-mccray/poems/. So far we’ve done Bop poems, 9-line poems, portraits, nature poems, repetition incantations, enigma poems, elegies, Kay Ryan poems and recipe poems. It’s only a third of the way through the month and my brain is totally fried. Every year this is a distance race.

One assignment was to do a poem around something lost or found. These were two very beautiful examples:

The Arm by Stephen Dunn
State of Grace by Elizabeth Boquet

Barrellhouse Magazine has also been doing 30 days of poems about pop culture. Some interesting examples:

On Translation
View from a Folding Chair 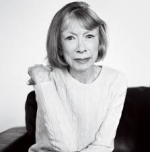 A few months ago a book club I'm in read Joan Didion's second novel, Play It As It Lays, a critique of Hollywood and Vegas. At the same time I decided to read Didion's new biography by Tracy Daugherty. It's full of stuff about her writing process. In one section, Daugherty quotes her in explaining the difference between being an intellectual and a writer:

A writer is “a person whose most absorbed and passionate hours are spent arranging words on pieces of paper. ..one becomes a writer [this way]: ‘you just lie low…You stay quiet. You don’t talk to many people and you keep your nervous system from shorting out.’”