Continuing to work through the Poet’s Corner card deck series. I was excited to find two similar photographs for these first two poets. Small thrills. 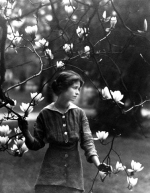 My candle burns at both ends;
It will not last the night;
But ah, my foes, and oh, my friends—
It gives a lovely light!

This is her most famous poem and it captures the “willful irresponsibility of the time and place" which was "Bohemianism in New York during the 1920s.”

She's writing about narcissism! It's the 21st Century topic! This English poet and novelist was known for her nonsense verse which attempted to work against the pompous or overly serious verse of sense, although providing some "serious underlying messages." 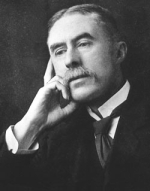 “Terence, this is stupid stuff:
You eat your victuals fast enough;
There can’t be much amiss, ‘tis clear,
To see the rate you drink your beer.
But oh, good Lord, the verse you make,
It gives a cap the belly-ache.”

A.E. Houseman from “Terence, This Is Stupid Stuff”

This one is a good punctuation lesson. According to the card, Houseman experienced “enormous appeal” for his “idealized rustic vision” and his “insistence that poetry was more physical than intellectual.” He wrote primarily pastoral, rhymed and metered verse which “had a hypnotic quality that led itself to easy memorization.” The character of Terence was a regular and an alter ego in Housman poetry, a disguise for his love of his friend. He started writing after age 40, once the drama of his heartbreak and “emotional life” was over.

Posted at 01:04 PM in Today's Pillar of Poetry | Permalink