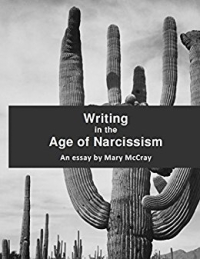 Narcissism is in the news big time right now. It's as if the years of self-absorption have finally come home to roost. It seems like a good time to plug, Writing in the Age of Narcissism again. But first some recent articles on the topic:

Trump is an extreme narcissist, and it only gets worse from here (The Boston Globe)

Donald Trump’s Narcissism Got Him Elected. It Won’t Get Him Impeached. (Fortune)

Narcissists In The Workplace (Psych Central)

Me! Me! Me! Are we living through a narcissism epidemic? (The Guardian)

World events call for a change in attitude. If you're a former gunslinger looking to turn good, this is a place to start:

Writing in the Age of Narcissism

If you’re a poet or writer in any other form or genre, you’ve probably witnessed many modern, uncivilized behaviors from fellow students, writers and academic colleagues—their public relations gestures, their catty reviews and essays, and their often uncivil career moves. Like actors, visual artists and politicians, cut-throat pirate maneuverings have become the new normal. It’s what occurs whenever there are more people practicing an art than any particular economy can support.

The difference with writers is their ability to develop highly conceptualized, rationalizations in order to prove their worth and ideals. This isn’t a new phenomenon, but it has reached a critical mass in meaningless attempts to pull focus in a society obsessed with the show-biz spotlight.

Writing in the Age of Narcissism (72 pages) traces how the narcissism epidemic affects writers, including our gestures of post-modernism and irony, and proposes an alternative way to be a more positive writer, critic and reader.

Posted at 01:31 PM in Books to Read, Think Outside the Lament | Permalink