Mark Doty recently visited Albuquerque to give the inaugural speech for a new D.H. Lawrence Ranch (in Taos, NM where he is buried) restoration project. The event was hosted by the University of New Mexico alumni association and was well attended. Turns out Doty is a fan of D.H. Lawrence, (a rare thing among poets lately), had previously stated in a Facebook post that Lawrence's poetry wasn't read nearly enough.

Doty connected him to Walt Whitman and William Blake and praised his directness, intensity, willingness to rage, and admired the time Lawrence allowed to spend studying something, (rather, looking at something), in a poem. Doty stated that ordinary poetry workshops would chop Lawrence up today.

Doty contrasted Lawrence to the most famous modernists of his day, T.S. Eliot whose narrative Doty considered chilly, dry, ashen, containing no blood or juice. Plus, Doty said, Eliot was a cat person. 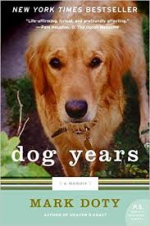 This is a good time to plug Mark Doty's "Dog Years." I give that book away as a gift all the time, a book that is both a memoir about his partner's death as it is an ode to dogs.

Doty said Hart Crane was basically an answer to Eliot's "Wasteland:" as if Crane is responding, "I LIKE cities and bridges, thank you very much!"

Then Doty read some of his own poems that he felt were answering DHL:

When asked if he wrote in forms he said all poems are formal, formal objects with patterns and design.  Someone asked him who his favorite poets were and he named Marie Howe and her book What the Living Do and said her new book coming soon, Magdalene, was very good.