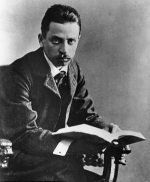 Continuing in 2017 to work through the Poet’s Corner card deck.

Who, if I cried out, would hear me among the angels’
hierarchies? And even if one of them pressed me
suddenly against his heart: I would be consumed
in that overwhelming existence. For beauty is nothing
but the beginning of terror, which we still are just able to endure,
and we are so awed because it serenely disdains
to annihilate us. Every angel is terrifying.

The elegies are named for Duino Castle on the Adriatic Sea. The card didn’t have much else about Rilke. Sad face. 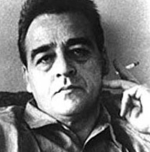 Yes, I went to the city,
And there I did bitterly cry,
Men out of touch with the earth,
And with never a glance at the sky.
Oh, can’t hold the han’ of my love!
Can’t hold her pure little han’!

From “I Went to the City” by Kenneth Patchen.

Patchen was a poet and a painter. His idol was William Blake. He created many painted poems which he called “anticalligraphy” which were sometimes accompanied by jazz musicians. 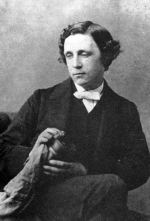 And through the tremble of a sigh
May tremble through the story.
For “happy summer days” gone by,
And vanish’d summer glory—
It shall not touch, with breath of bale,
The pleasance of our fairy-tale.

From Lewis Caroll’s “Through the Looking Glass” preamble.

Carroll "wrote children’s literature that adults liked," much of it was poetry and puzzles. He was fond of “clever young girls” in the vein of Alice in Wonderland.

Posted at 01:13 PM in Today's Pillar of Poetry | Permalink