These are the cards I pulled this week:

This be the verse you grave for me:
Here he lies where he longed to be;
Home is the sailor, home from sea,
And the hunter home from the hill.

According to the card, he lived a short life, beset with illnesses. However, he's known for his adventure tales and he did travel to the South Sea Islands and Samoa. This short poem "Requiem" was written as his own epitaph. 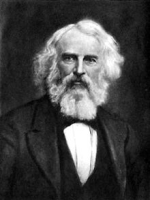 Toiling, rejoicing, sorrowing,
Onward through life he goes;
Each morning sees some task begin,
Each evening sees it close;
Something attempted, something done,
Has earned a night’s repose.

Whoa. Semi-colon overload, dude. This is from “The Village Blacksmith” by Henry Wadsworth Longellow (1807-1882)

The card states that Longfellow is “America’s first true man of letters.” He was a linguist, professor, translator, and critic, and “the most popular poet writing in the English language” during his 19th Century. Some of his greatest hits include: “The Song of Hiawatha,” “Paul Revere’s Ride” and “The Courtship of Miles Standish.” I own the book “Tales of a Wayside Inn” because for years while I was in college and our family spent Christmases in Boston, we would eat dinner at the Wayside Inn. I loved it. Which is obvious because I bought the book! Once I took my friends to visit his house but it was closed. There was a dispenser with buttons out front which appeased our disappointment.  The button had his picture on it and said, "I'm a poet too!"

Posted at 01:15 PM in Today's Pillar of Poetry | Permalink