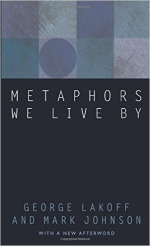 Just finished a great, challenging book, Metaphors We Live By, by George Lakoff and Mark Johnson. Not a new book but one to revisit when thinking about how deep metaphors go down into our conceptual thinking. The book covers objective and subjective philosophies and offers a new way of thinking about a knowledge that's neither objective or subjective but a mix of both.

Rattle and Votes for Poetry

I've really enjoyed my year-long subscription to the Los Angeles-based poetry journal Rattle. I'll be moving on to another journal next year but will probably touch base with Rattle again someday. My last issue published a contest winner and asked the readers to vote on five or so runners up published in the same issue. I felt weird about this and I can't completely sort it out. I love that Rattle is demurring from its role as gate-keeper here. It's a real "let the people decide" moment and it feels democratic. But something in me didn't want to have winners and losers among all of the strong and interesting poems. That's just life, right, winners and losers? So much in life has become an American Idol competition: singing, sewing, cooking, and on and on. It's fatiguing. Does everything need to be a competition? Maybe it does. You can't have it neither way.

The end-of-the-year news roundup and it's actually pretty hopeful in some small way (go figure):

Still, Poetry Will Rise: The aftermath of the 2016 election has found many Americans seeking solace—and wisdom—in verse. The editor of Poetry magazine has some ideas why. (The Atlantic)

Verse goes viral: how young feminist writers are reclaiming poetry for the digital age (The Guardian)

Italian town apologises for its part in persecuting Dante, 700 years after the poet's expulsion from Florence (UK Telegraph)

Why (Some) People Hate Poetry (The Atlantic)

'How I accidentally became a poet through Twitter' (BBC)

A poet’s ode to the meaning of work (PBS Newshour)