A Book About Alternate Intelligences 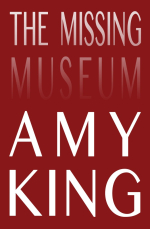 A month ago I received a review copy of Amy King's new book of poems, Missing Museum. I know only a bit about Amy King from Goodreads, reading news stories about writers who are aggravated Bob Dylan won the Nobel Prize, and seeing her on one of the ModPo MOOC panels. I also quoted one of her essays in my eBook, Writing in the Age of Narcissism. But I hadn't yet had an opportunity to read her work.

In this book I was initially fascinated by her creative but non-integral titles like “Pussy Pussy Sochi Pussy Putin Sochi Queer Queer Pussy” and “One Bird Behind One Bird” and "Imperfect Yet.” The titles felt like random good lines being put to good post-modern use. The first and ending poems also experiment with ALL CAPS, making them challenging little book ends. If every poem had been in ALL CAPS, I'd probably still be reading them.

Once deep into the poems, they reminded me of poems by Jim Carroll due to their kind of gritty, skin-ripping quality. Or Henry Rollins. These poems are unkempt, full of street-intellectualizing that is delightfully pushy.

She had me in the prologue with "purveyors of knowledge, but too, your emotions are an intelligence.” Not only is this a defense of the emotional, I feel the entire set is writing about various intelligences: equations, indices, data, “math life,” points, beliefs and theories that aren’t adding up. In “Pussy Riot Rush Hour” “we incomplete ourselves.” In “Violent Blossoming Cities Ask How to Hear the Song” you can “centrifuge yourself.” These feel like riffs that solve for disruption.

In the book's back-advertising, John Ashbery is quoted describing King’s poems as “abstractions to brilliant, jagged life, emerging into rather than out of the busyness of living.” That’s a good way of saying it (I guess). She's writing in a very intense now-ness.

But I would like to separate King from Ashbery here because I think she’s moving in another direction from the Ashbery school. These poems move in and out of accessibility. There are bits of straight-shooting I loved in poems like “A Room Without Walls” invoking whiskey and Lionel Richie. There's movement here where some Ashbery-students stall. She's not stuck in the same whirlpool of an old experiment. Literally, “the room opens into a field.”

King can give even her enigmatic-ness a precision in one section but then provide some slack and sense in another. We relax from earlier abstractions and the contrast is satisfying and interesting.  There's also emotional directness at a cerebral level. Here's where we push to escape agendas, both sexual and poetic. In "The Little Engine’s Death" she wonders, “am I hiding in the shotgun’s sexual agenda?” King is not afraid of feelings. And I can't help but think back to her essay on exclusion in today's poetry world when I read a line like this from "My Singularity is Self-Inflicted,"

Tonight I am in the museum of my life, and you have an inflated sense of signature.

And we're back to realism in a poem like "Your Heart, The Weight of Art, " which reminded me of Neruda:

Sometimes I see what isn’t there, and that includes Love,
as if some parlor trick is inherited from my great grandmother
of the mythical Cherokee variety. But she was no soothsayer, and I’m
just alone
now, with the life that is in you calling mine out.

There's subversiveness around what makes us feel. From the poem "One Bird Behind One Bird:"

Too bad about the plate, the shadowbox, the twisted book.
The universe conspired, a felony against your face
in search of the tiny light that carves such things,
a grand piano to play, a poor painting by Paul Stanley
resembling the way I feel instead,

I also like "Drive By and Understanding the Poem" as a meditation on language and poetry, literally poetry as place and place as a congregation of those who wield power in Poetry.

The poem’s also a handshake.

These poems are not solely games and juxtapositions. This is the difference between random and almost random. It takes more dexterity and I feel like there's just a smarter head behind it.

We are all cross-dressing
in tiny wings with the machines of bones to go on.