« Two of My Poems Appearing in El Portal Journal | Main | Poetry, Blogging and The Election »

Poetry Card Week 4 (US and UK) This week we cover three cards!

The bloodhounds have miss’d the scent of her way,
The hunter is rif’led and foiled of his pray,
The cursing of men and clanking of chains
Make sounds of strange discord on Liberty’s plains.
Oh! Poverty, danger and death she can brave,
For the child of her love is no longer a slave.

Harper wrote antislavery verses and gave many lectures and sermons before and after the Civil War. She wrote a prolific seven volumes of poetry and her novel Iola Leroy, or Shadows Uplifted was the best-selling 19th Century novel by an African American writer.  She's also the first poet I want to investigate further from these cards. 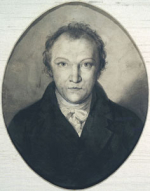 To see a world in a grain of sand
And heaven in a wild flower,
Hold infinity in the palm of your hand
And eternity in an hour.

Blake, the infamous poet/printer/painter, was “bereaved” by the “cult of reason” which he said was a big bummer to imaginative thinking. You can’t have both? This particular poem is a treaty against cruelty to animals. 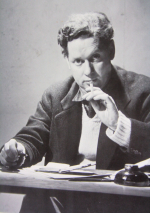 The force that through the green fuse drives the flower
Drives my green age; that blasts the roots of trees
Is my destroyer.
And I am dumb to tell the crooked rose
My youth is bent by the same wintry fever.

“The Force That Through the green Fuse Drives the Flower” by the long-title guy, Dylan Thomas (1914-1953)

This poem is from one of his teenage notebooks. Another quote from the same poem, “Each image holds within it the seed of its own destruction…Out of the inevitable conflict of images, I try to make that momentary peace which is a poem.” Take that post-modernists! Thomas was a public poet, earning money on the lecture circuit and famously boozing it up. The card says he died after a legendary bar binge (at the White Horse in the West Village) and implies he might have died of alcohol poisoning. But, he might have actually died of pneumonia. It was also a time of severe air pollution in NYC. Read the revisionist theories:

Posted at 12:50 PM in Today's Pillar of Poetry | Permalink