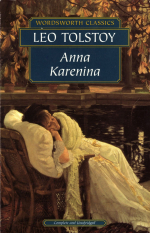 Last year I convinced Monsieur Big Bang that we should be listening to Great Courses on the way into work. He wasn't keen on this nerdy idea but we got wrapped up in etymology classes, one of which lead us to the entertaining and informative Slate podcast called Lexicon Valley and we've been working through something like 99 podcast episodes that have been airing since 2012.

Last week, we came upon the 2015 "The Many Lives of Anna Karenina with Masha Gessen" episode which is a great, succinct outlining of the issues surrounding creating translations using Anna Karenina as an example, how different translators are making different word choices based on meaning and tone.

Last November saw the publication of two new translations—by Marian Schwartz with Yale University Press and Rosamund Bartlett with Oxford University Press—of Leo Tolstoy’s epic love story Anna Karenina. But why does a novel that already has at least six or seven English-language editions need yet another update? Journalist and author Masha Gessen discusses the difficulty of translating a literary masterpiece and argues the more the better.

You can access it online at Podtail or via iTunes. 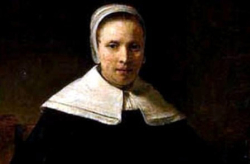 I'm still working through my deck of Poet's Corner cards that I found in my parent's house. Card number 2:

In silent night when rest I took,
For sorry near I did not look,
U waken’d was with thundering noise
And piteous shrieks of dreadfull voice.
That fearful sound of “Fire! And “Fire!”
Let no man know is my Desire.

This excerpt is from “Upon the Burning of Our House” (1666) by America's number one Puritan poet, Anne Bradstreet (1612-1672). This year I took a course in Puritain poetry from HarvardX. I took all their classes. More on that later. One thing I learned was that Puritan poets weren't only writing about their Puritan hangups. They weren't even all Puritan. But they all had a pretty tough time of it there in New England with disease, bad weather, angry indigenous Americans and those creepy, scary woods everywhere. Imagine showing a Puritan the Blair Witch movies. They would have lost their minds. Anyway, Bradstreet was the wife and daughter of two governors of the Massachusetts Bay Colony and her poems, the card says, were “steeped in ‘the Puritan darkness." She wrote 400 pages of poetry, (you go, girl!), and not all of them were “starkly religious.” She is "considered the first poet of consequence in the American colonies.”  Her poems show a “suppressed emotional life" and, sadly, only one of her books has survived (The Tenth Muse, Lately Sprung Up in America), the one that was "published in London in 1650 and posthumously in Boston in 1678."

More about the poetry cards. 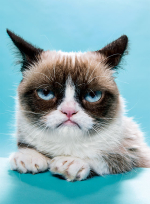 Just like grumpy cats, some poets have been grousing about the dearth of good poetry for eons, as evidenced below:

In the summer 2016 issue of the poetry journal Rattle, there's an interview with Alan Fox:

Rattle: What impact has the Internet had on poetry?

Alan Fox: I think you’ll get very different answers from different poets…I just had a conversation with a poet I can’t name, who was very angry because they felt that the internet was flooded with lots of mediocre poetry. Now that anyone can put a badge on their shirt that says “poet” and communicate with other poets and have all this great access. The world, the media, the “readers” are overwhelmed with bad work, and thus can’t find or recognize where the “good” work is. That is a paranoia I don’t share. It’s an argument I’ve heard, over and over, that bad poetry somehow diminishes our joy and plight. That if the “bad” poets are allowed to publish, it destroys connoisseurship. I don’t see that to be the case. I think that every great artist, like every great art critic, will die ignorant of most of the good art of their time. That’s been true of virtually every generation. I mean, why else does it seem that half the work that ultimately “comes to define a generation” is discovered posthumously?”

Now I read that at the very same time I was reading the book Harriet Monroe and the Poetry Renaissance: The First Ten Years of Poetry (1912-1922) by Ellen Williams (1977) while researching local Santa Fe poet Alice Corbin Henderson (who was the assistant editor during that time). From the book:

William Marion Reedy acknowledged a renaissance in writing Harriet Monroe on June 1, 1915, and remarked that he felt Poetry was responsible for it…Reedy visited the annual banquet of the Poetry Society of American in New York, and the sleekness and propriety of the assembled poets made him feel grubby…He felt irritated by the sheer volume of verse poured out: "Never before were there so many pleasant, well-phrased, melodious poems written as there are today, and at no other time has there been such a dearth of really distinguishable poetry.”

Alan Fox is right. This was the era of T.S. Eliot, Ezra Pound, Wallace Stevens and Robert Frost, among others. Nothing distinguishable as it turns out.

Learn About Your State's Art History 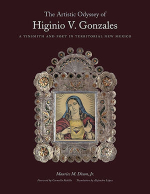 Okay so New Mexico has a particularly incredible art history. But I'll bet every state in America (or province of the world) has an interesting art story, too.

While working on a novel about landscape, I decided to quit my sporadic library education on New Mexico art history and actually take a class here at CNM. I was on a quest to learn about the ways other artists describe the landscapes here.

Grabbing library books was great but taking a class can give you a more comprehensive overview and lead you to some art subjects you might not normally investigate. A broad history could even bring in international elements of the story, which my class did. Not only did we touch on prehistoric and modern Indian art but colonial and modern Hispanic art tracing its roots back to the Islamic Moors in Spain, as well as immigrant European influences.

So much was mind blowing in this class.

We watch a Hung Liu Video from a Kansas City museum, not this one but a similar one. In the video we learned:

You can see how some of these ideas might benefit a writer.

We also watched a video about making manuscripts by hand, an amazing video if you love books as objects. 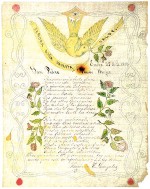 My main focus in taking the class was to learn about modern New Mexico art, but I ended up really getting into colonial and territorial Spanish pieces and ended up doing my class paper on a tinsmith named Higinio V. Gonzales. I picked him because he was also a local poet and a local museum exhibited not only his tin pieces but one of his poems painted out as an object of art. Turns out he has an interesting poetic legacy in territorial New Mexico as well, having published poems about how the state should be named, poems about relationships and local Las Vegas, NM, politics, and one reminiscent and far predating in structure the Beach Boy's "California Girls."

His lifespan was also incredible in how he brushed against many iconic historic New Mexico figures. He was a teacher, an artist, a writer, and served in the military during the Civil War. To read more, visit: 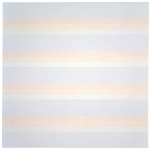 I also veered off at one point reading about painter Agnes Martin, who left the art world and came to New Mexico to lead a monastic life of painting.  Agnes wrote poems, too, but I haven't been able to find very many of them.

In the class also fell in love with straw applique, colcha embroidery and bultos carvings (along with retablos and reredos paintings), all colonial Hispanic carved Catholic pieces made predominantly in New Mexico in the 17th century for homes and local missions. Coincidentally around this time I came across Dana Gioia’s poem about a bulto,“The Angel with the Broken Wing" which was published in Poetry magazine.

And you may think none of this ties back to landscape painting, which set me off on this class journey in the first place. But it does. All these pieces were devised locally in response to the landscape, the distance of the New Mexican community from either Spain, Mexico City or the United States and the shortage of gold, silver and other materials with which to create art objects. These forms wouldn't exist without the harshness of the landscape and its remoteness from civilization at the time. 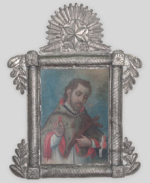 Bultos (or Santos), Retablos, and Reredos (for Church altars): 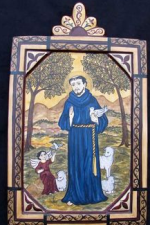 I was on vacation in Pennsylvania last month helping my parents clean out stuff. I found a bunch of books I loved as a kid and this stack of poetry-related cards, Poet’s Corner Knowledge Cards published by Pomegranate Publications. And you know I love conspicuous poetry products! 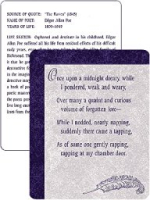 front of the card is just mystery poetry text without attribution. This is the first one I pulled:

“It’s time. Old Captain, lift anchor, sink!
The land rots; we shall sail into the night;
if now the sky and sea are black as ink
our hearts, as you must know, are filled with light.

Only when we drink poison are we well—
we want, this fire so burns our brain tissues,
to drown in the abyss—heaven or hell,
who cares? Through the unknown,
we’ll find the new.”

The back of card shows the source of the quote, which is “The Voyage” from 1957, translated by Robert Lowell, followed by the name of the poet, Charles Baudelaire with his birth and death year and a thickly justified paragraph called a Life Sketch, which compares the ever expanding Les Fleurs du Mal with Walt Whitman’s Leaves of Grass. But rather than poems of rejoice, Baudelaire's were poems of revulsion with life. The card also notes how Baudelaire is a great French literary figure who has served as a mentor to many modern poets.

So conceivably, you could learn about a new poet each day for 48 days. I'll go through the cards every few weeks here and we'll keep track of the demos.

Pomegranate Press has lots of cards for sale including some esoteric decks like Famous Animals and another called Canadian Literature and even a deck of One Letter Words (which could be useful for something I suppose): http://www.pomegranate.com/knowledgecards.html.

However, the poetry deck only seems to be available now on Amazon.