So I lived in Santa Fe for three years between 2010 and 2013. I've lived in New Mexico for 14 total years on and off. My father’s family homesteaded here and still lives here. I was born here. I have many ties to New Mexico and many visits have brought me to the Georgia O’Keeffe Museum in Santa Fe. Monsieur Big Bang even worked security there for three years while he was completing his master’s degree nearby at Highlands University in Las Vegas, New Mexico. So needless to say we have lots of O’Keeffe books. Over the years I’ve also collected a few books of poetry dedicated to her. Three, in fact, solely covering the topic of O’Keeffe, either references to time spent with her or responses to her work.

This book consists of 108 un-named poems that read almost like a journal: O’Keeffe did this; O’Keeffe did that. Carol Merrill, a University of New Mexico graduate poet student, started working for O’Keeffe in the early 1970s cataloging O’Keeffe’s estate library. She worked with O’Keeffe, then 85 years old, for seven years doing personal assistance and secretarial work. Here is an example of her poetry style:

Last evening
I commented
to Miss O'Keeffe
a large piece
of white water color
paper
looked particularly good
with rough surface
and curly edges.
She said,
"Yes, it'll never look
so fine
after something
is drawn on it."

Literally, these are just slices of life considered to be of some import to Merrill. Sort of illuminating in a biographical sort of way. Enough so that the Georgia O'Keeffe Museum keeps copies of this book in their gift shop.

Watch Merrill read from her books on O’Keeffe. Blossoms & Bones, On the Life and Work of Georgia O'Keeffe by Christopher Buckley, 1989

Christopher Buckley is the son of William F. Buckley, Jr. and these are his 39 pages of poems mostly named after locatiosn and paintings. Some examples:

No one takes the absence
into account the way I do -
this rind of backbone, the bridge
and scale of its blank articulation,
sustains some perfectly whole
notes of light against the raw
muscle of the land unbound,
the undercurrents surfacing
in concert with the white riffs
of cholla spotting the swales.

Put right, one part of loss
counterpoints the next, leaves us
much to see despite the frank
abrasion of the air, Finally,
this thighbone is every bit
the bright, hard stuff of stars
and against the hills'
rust and clay sets free
a full, long silence here
that as much as anything
sings all my life to me.

My first memory
is of the brightness of light -
light all around -
a quilt of it, a patchwork
of red and white blossoms on blue
like these clouds down the evening sky,
heir form, their budding lines . . .

My mind holds them
tretching away
bove the day's cadenza,
hat half hour when the hills
low and lift on a last held note -
t is then that my mind saunters
ver the cool, immaculate squares,
ver the horizon line,
he next hill, where light flowers
across the finite trellis of this world . . .

This is an improvement. At least Buckley is having a personal response and trying in ways to capture the flair of the paintings.

However, neither of these two books manage to capture O’Keeffe on paper. Much of this has to do with the banality of describing her day-to-day life, as the first book tries to do, or attempting to describe the paintings and a visceral response with poetry and failing, as the second book tries to do in surreal yet vague ways. 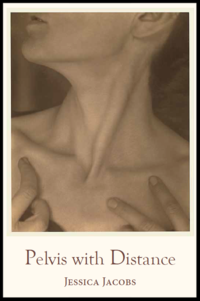 The best O’Keeffe book so far is Pelvis with Distance: A Biography in Poems/Self-Portrait by Proxy by Jessica Jacobs, 2015

This book seems much more alive than other two. Although also a response to the artworks, Jacobs is from a younger generation. Much more material about O’Keeffe is now available for scholarship. This book was also written while Jacobs was staying near Ghost Ranch, a location close to one of O’Keeffe’s two homes, writing in self-imposed seclusion and using the O’Keeffe museum research center to spur creative output. In fact, Monsieur Big Bang might have been working at the front desk of the research center when Jacobs came in.

Jacobs poems are both more simplified and yet more detailed, something necessary when writing about paintings. This poems have the “dirt in mouth” quality she describes.

One concern of the museum has been the fact that their visitors tend to skew older, particularly older baby boomer women. I've often wondered, does O’Keeffe translate to younger women? This book tells me that indeed she does. Jacobs 'gets' O’Keeffe’s themes and considers them in her project of self-imposed solitude within the same setting of O’Keeffe’s somewhat self-imposed solitude.

Jacobs tackles love and sexuality, modernism, place, skyscapes, O’Keeffe’s penchant for looking through objects, the cult of celebrity and the religion of nature. Jacobs has studied O’Keeffe correspondence with her husband, Alfred Stiglitz, and the book follows both the chronology of O’Keeffe’s life alongside Jacobs’ own poem-a-day for a month project near Ghost Ranch. The points-of-view switch between O'Keeffe, Stiglitz and Jacobs. Considering the complexity of points of view and the two biological tracks, Jacobs embodies O’Keeffe in truly surprising ways and with recognizable accuracy. For narrative satisfaction, Jacobs even provides a quiet resolution for O’Keeffe and herself.

It would be great to know Georgia O’Keeffe history for this book, but Jacobs provides generous notes for these poems.

In a fragment from “From The Faraway, Nearby” Jacobs tackles the idea of abstraction:

There is no middle
ground. Fore
and back collapse

to a single plane.

In the pines, we found a house,
deserted and crawling
with roses. I came back alone—

a night when the moon made
even the underbrush shine.
Close-grown trees chirred

in the breeze. I locked the door,

each painting’s tone more
strident than the last, speaking
in every voice but my own.

Anita, I will have to start over.

After the parceled horizons of Manhattan,
Texas plains are a glassy eternity

laminated by sky. Trapped
between them, I am a too-diluted pigment,

going transparent at the edges.
Which makes Palo Duro a deliverance.

At its rim, I am a sail,
arms outstretched, ready to crow

over the canyon, dive down into it.
But the only paths in are cañadas,

steep and rocky, forged and rutted
by hoof prints. Straggles of cattle

watch from above, lines of black lace
against the blanched day. By night,

that thrill is still with me. I stand
with brush to the tight-wefted board

while the cows, now penned,
low for their calves

rhythmic as a Penitente song.

Posted at 12:15 PM in Books to Read, Today's Pillar of Poetry | Permalink