Jim Harrison, Poet, Novelist and Essayist, Is Dead at 78 (The New York Times)

A poet who knows it: Bill Murray shares some favorite verse (Press of Atlantic City)

9 Latino Poets You Should Be Reading (Bustle)

Another Poet in the Family 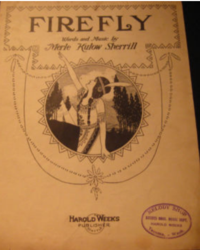 So it turns out my maternal grandmother’s aunt was also a poet. I found another distant relative poet on my father's side and blogged about it a few years ago in these posts:

Anyway, I reconstructed a poem erle Kulow Sherrill composed that was printed in her mother's obituary. It's a good, albeit depressing little ballad.

The Failure
by Merle Kulow Sherrill

Although I ever did my best,
My best was far form good.
Although I failed to reach the goal
I did the best I could.

Long days I toiled 'neath the burning suns
With hand that knew no skill.
Although I strove with might and main,
The place I could not fill,

I longed to write some kindly thought
To cheer my fellow men,
Alas, the words I could not form
Beneath my faltering pen.

I fain would sing a joyous song
To brighten land and sea,
But I alone in all the world
Have heard the melody.

I sought to paint a picture bold
To stem the world's mad rush,
The colors somehow failed to blend
Beneath my faulty brush.

And when there comes the long dark night
That ends my futile day,
And when I stand before the throne
What will the Master say?

Perhaps He'll turn His grieving face
And say "You must depart,"
Or, will He take me to His breast
With understanding heart?

Somehow, I feel He'll say to me,
"You did but little good,
But enter through the Fates of Peace,
You did the best you could."

Despite mostly searching in vain for more information about my mother’s great aunt, we did find some sheet music authored by her, called “Firefly” by Merle Kulow Sherril from Harold Week’s Publisher out of Tacoma, Washington. The cover boasts a  possibly northeastern American Indian woman replete with headband and feather, teepees and pine trees in the background, holding her arm out to the name beyond the border of the picture. There are indecipherable pencil notes written on each page.

The night winds wing of my lost Firefly.
Sad is the strain of their lullaby.

Birds softly chant in their quiet flight
And call her name in the silent night.

Firefly sleeps at the end of the trail
Under the glow of the starlight pale.

Shell run no more in the dewy morn,
Nor answer gaily the hunter’s horn.

She’ll sing no more through the golden noon,
Nor dance again ‘neath the harvest moon.

Her face I see in each sparkling rill.
Her laughter sounds from hill to hill,

I call her name by the lonely shore,
But Firefly comes to my side no more.

I can’t read music so I’m mapping the lines in my head to the song Sleazy by Kesha and/or the Ben Folds cover version.

Could this be a literal poem about a firefly? Why is Firefly always capitalized. Is the lightning bug symbolic for something else, a love story maybe? Where did she go, this female flight of light? So many questions.

National Poetry Month 2016 Is In Swing 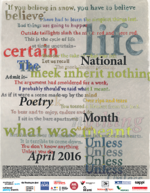 National Poetry Month 2016 is off to a busy start. To the left see this year's Academy of American Poet's poster. I wasn't crazy about it so I didn't purchase one. But you can purchase all their yearly posters.

I'm participating in NaPoWriMo again this year on Hello Poetry but I'll be doing the daily prompts for the first time. My over-arching add-on is that all the poems should be about this year's election cycle. I'm calling it 30 Poems About the Same Thing. It's been challenging to be balanced and take a larger-than-partisan view.

Bustle Magazine just posted a good list of 9 ways to add more poetry into your life. The Academy of American poets also posted their 30 ways to celebrate list (including some good essay links).

Don't forget that National Poetry Month has a capstone holiday on April 28 which is Great Poetry Reading Day. Some sites that detail the holiday:

To clarify, this is not Crappy Poetry Reading Day so make sure to find something Tony the Tiger would be proud to read.