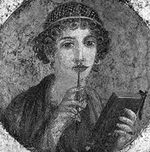 Poet Ross Gay is on a roll: He talks gardens and gratitude (The Los Angeles Times)

Sex trafficking victim is now a famous poet (Asia One)
Bangladeshi woman whose poetry collections were published from India last year after her rescue from a sex racket there and published under the pseudonym Chhaya.

James Franco is not a Queer Poet (City Paper)

What can a poet tell us about the Zika virus? (Washington Post)

Experts to probe death of Chilean poet Pablo Neruda (Yahoo! News)
Will this exhumation ever end??

Prison poetry makes it to the outside

At Monsieur Big Bang’s local coffee shop he found a handout of a poem written by a "free man in solitary confinement in KS prison" discussing "corporate masters, born into slavery and taking back, lives, liberties and pursuits of Happiness and redistributing wealth back to the majority.”

Devoid of any figurative fanciness, it was full of verb and in the now. Sure it was a hodge-podge of a call to political action but political poetry is alive and well behind the wall.