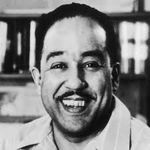 It’s fitting that today, the birthday of Langston Hughes — the poet and leading figure of the Harlem Renaissance — is also the start of Black History Month.

His novels, stories, plays and poems opened the eyes of many to the African-American experience. And they continue to do so.

Hughes got his break while working as a busboy at a Washington hotel. He slipped his poems next to the plate of the poet Vachel Lindsay who read them and was immediately impressed.

Introductions were made and Hughes was soon a published poet. He received a full scholarship to Lincoln University in Pennsylvania, and his debut book, “The Weary Blues,” was released even before he graduated in 1929.

Hughes was born in Joplin, Mo., and his parents’ divorce forced him to move around a lot.

One of those moves was fortuitous. He was named “class poet” in grammar school in Lincoln, Ill. He later said he believed he was chosen because of a stereotype that blacks had rhythm.

“There were only two of us Negro kids in the whole class and our English teacher was always stressing the importance of rhythm in poetry,” he said.

It led Hughes to try his hand at writing, and the rest is literary history.

Posted at 10:02 AM in Today's Pillar of Poetry | Permalink