Last October, near Halloween, I had the opportunity to attend a reading of the poetry faculty at Central New Mexico Community College. The event was called “Faculty in Berets” and aside from the clichéd and hoaky title, it was one of the best lit readings I’ve been to in New Mexico these last five years.And because the college is a community college, (I guess), their bookstore doesn’t carry any faculty books. There also weren’t any books available at the reading. But at least I was able to track down some online. 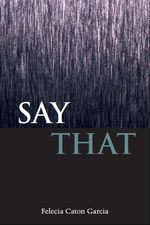 When Felecia Catron Garcia read from her book Say That (2013), she talked about how well suited her poems were to Halloween--being, as they were, so full of ghosts. Her book is haunted by not only ghosts but domestic violence (From the poem "Whirlaway" -- “To think I will have to live through this”) and death, so much death that “death is weary of me.” The book also explores Catholicism, surreal dreams, inertia, motherhood and its moment of impatience, (a most sober look at parenthood), some of the best in traumatic love poems: dangerous love, absurd love, love from the dead.

"Because I love you, I have given up on the idea of love.”

From “Dreams of the Dead”

"Take off
your shoes and lie on his grave. Tell him
I live in this world and no other.
Put on your shoes. Don’t look back."

All throughout the book I enjoyed her titles that referred to the poems but didn't retell them or pre-tell them. There's a great archaeology poem called “El Mozote, El Salvador, 1992:”

"We are here to discover what happened then,
but I want to know what happens now.
That gray sky is a stroke of luck. My fingers
Clutch the small hand bones of children."

After all the harrowing but honest parenting poems (“Four Gifts,” “Weaning”), the namesake poem, “Say That,” is a beautiful relief, both a play on a lie told to a child about their birth story and some suggestive, creative alternatives to the birth story. 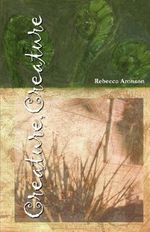 Rebecca Aronson’s Creature, Creature (2007) contains poems that bounce between New Mexico and the Midwest in Kansas and Missouri (the flat parts) and had lines I especially appreciated (having lived in the Midwest) like “There are shadows from nothing but ourselves.”

There are little moments of ritual and religious artifact in the book, a wonderful ode to pepper, a very visceral poem about oranges and body spheres called “Navel & Blood.” The poem “After Surgery” deals with the loopy state of moving through hospital rooms drugged.

Aronson works in parataxis or juxtapositions in many poems and some experimental prose. “Diary of Light” was a favorite experiment which ends “Enter through your own shirt. Try to be your best self.”

She does the elusive Midwestern prairie poem well. "West" is a good poem about prairies, insects and "whatever moves.”Or  from the poem "Crossing" the first line: “I’m driving home, one eye on Iowa.”

“In the Field” starts with “Where cows graze" and ends with

“who
tipped his hat, later introduced
as your mother’s favorite
neighbor at the market where
he shook your hand
a long time.”

“What If” is an example of an experiment I like. Parataxis that builds to something and  “4 am, Sitting in the Dark” and “Echo” would each make a great meditation poem.