I went to Flagstaff last summer as part of a big family trip across northern Arizona where my father grew up. We visited Canyon de Chelly, Hopi, the Grand Canyon, Flagstaff and La Posada, the Harvey House in Winslow. Since my brother and sister-in-law like to visit college bookstores for t-shirts and I like to visit them for books of local poets who teach there, we squeezed in a visit to Northern Arizona University's bookstore. I only found one local author there but I did find a copy of their local literary journal called Thin Air. This Noisy Egg by Nicole Walker, 2010

I did have trouble getting started with this book, something seemed off with the rhythm and line breaks and free association. I couldn’t tell if her line breaks were for look, sound,  or meaning. Many feel like they could have easily been written as prose.

But there were poems in here I loved: the list poem “A Number of Things are Scarily Lacking.” This poem illustrates for me how parataxis really works, juxtapositions of content forced into poetry lines is getting old when what we're dealing with are essentially lists of poetic phrases.

“…We can all climb on, ride him up and down 101--
a whole country riding on the back of some awakened DNA, hanging
onto the bucking strands of a mappable--believable—dawn.

Other poems did rise to greatness, like “As if a fact”

“The world, revised is beige not turquoise.
That is easier to swallow.”

I really enjoyed her long poem, “The unlikely Origin of Species” and “Nor do I know the ways of birds clearly” with:

It wasn’t premonition, just air
blown in from chaos, powerless as prayer.” 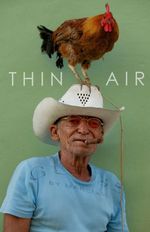 The lit journal Thin Air was so enjoyable its made me want to add college lit journals to my list of college bookstore scavenging. I would peruse this journal further although the layout was clunky.  The short stories I enjoyed were “Meta-fictional Pasta” by Jaqueline Doyle and "Xerxes" by Andrew Bourelle. And I liked more of the poems in here than I do in most literary journals, student or professional.

"Birdwatching for Beginners" by Mark DeCarteret, the set of Frida Kahlo poems by Robin Silbergleid, "A Small, Graceless Sound" and "To the Woman Who Died After Being Electrocuted While Crossing a Las Vegas Street" by Chloe Warden, "An Observation at the Conjunction of Black Holes and Cricket" by George Korolog, "Goldfish" by Esteban Rodriguez, and "I Knew" by Ross Losapio.

This is a better than average college lit rag. Check them out: http://thinairmagazine.org/