Happy New Year! This very blog and all my sites were just given responsive re-vampings over the holiday break so they should be more accessible on mobile devices. This makes it a good time to revisit what this blog’s mission really is. I’ve been looking at it lately like a poetry toolbox, lots of little ideas being fashioned as tools poets can take forward into poetry projects.

I read quite a few stories toward the end of 2015 about how eBook sales have stabilized and experts surmise that they may have found their permanent sweet spot. It’s too early to tell as techno-babies continue being born. It also contradicts other reports, such as this one about “slightly fewer Americans are reading print books, new survey finds.” Smashwords also did its annual survey of the previous year's eBook sales.

And here’s a smattering of other content I came across before the end of 2015:

Monsieur Big Bang and I went to see Life of a Dog in December. This is the new movie by Laurie Anderson, a beautiful visual poem reflecting on the nature of life and death, a project that had been inspired by the recent deaths of her husband, Lou Reed, her dog and her mother. I was so enraptured by the movie I immediately went online afterwards to get "the book" on Laurie Anderson, the coffee table book, the biography, anything! But there was none to be found. Five or six books exist on Lou Reed however. WTF?

Anyway, all I managed to find was an article here from The New York Times on her projects during the 1980s! I also found another good piece on Laurie Anderson that’s more current from NPR. It had some great life advice: 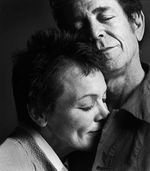 "One of the things that I had to do when I inducted Lou into - or gave a speech when he was inducted into the Rock and Roll Hall of Fame a few months ago was first of all, that's a very boring ceremony. It's - just goes on for, like, so many hours. And I was trying to shorten the speech because it was getting so dull. So I tried to shorten it, shorten it. And then I thought I'm just going to mention these three rules that Lou and I had. We made them up, and they had to do with how to live with your life 'cause, you know, life goes by so fast. It's really - and a lot of times things happen so fast you don't know - how should I react? What should I do? I'm in a panic, you know. So we came up with these, and they're time-tested rules. And I'll tell you what they are. So the first one is don't be afraid of anyone. Imagine your life if you're not afraid of anyone. Two, get a really good BS detector and learn how to use it. Who's faking it and who is not? Three, be really tender. And with those three, you're set."

At the end of the movie Life of a Dog Anderson invokes the old Huck Finn quote about "lighting out for the territories." I thought about that for a long time. The new year is, after all, a time to begin anew. It’s something we say when we’re in need of a life change, light out for the territories. We’ve been in that mindset now for over 100 years. But where does one go anymore? Where can you go to start over? California is pricing out even its natives. Portland is the new “it” but is it crowding up, too? Are cities the right answer anymore? Do we start to question ownership now? Should we just start going inside? Where are the territories? Does starting a garden count? It’s also true that all of humanity didn’t, in fact, all light out. This was an idea sold to us as hip and adventurous, which is was. But is it still?

There’s an old marketing adage that you can“frame or be framed” meaning if you don’t tell your story, someone else will tell it for you and you might be framed in a negative sense or literally framed for the crime.

My friend and fellow poet Christopher and I have been having good conversation about the trend of writers trying to develop their brands. He sent me an article about Diana Vreeland's heirs who have branded perfumes (and other things) under her name. With the new documentary about her (Diana Vreeland, The Eye Has to Travel) it felt the family was attempting to turn her life story into a brand.

Christopher commented that branding humans feels, well, very inhuman: "I don't think I have sufficient words to express how much I detest the prevalence of all these people fretting over their brands. It's such an un-repentantly cynical approach to furthering one's reach in the world, a mission largely predicated on realizing greater profits, whether it be of the individual or corporate variety. Indeed, that is what is so troubling to me about it; people have become so inured to the heartless devices and practices of the corporate hegemony, they are now gladly adopting the same in order to best capitalize their own sense of self-importance, or more bluntly put, their product.  Self as Product.  Yes, we try to "sell" ourselves everyday--to prospective employers, to colleges to which we're seeking admission, to potential mates...the list goes on and on--but this concept of purposely disembodying/distilling oneself into an aspirational brand for others to follow, covet or purchase--it smacks of such inflated self-regard."

I submitted to him that writer brands are all the rage these days on book marketing sites. The rumor out there is you can't get a non-fiction publishing deal unless "you already have a viable brand." I did a short search today and came up with these sites about the need to develop your writer brand:

What bothers me about it is how commodified we have let our art become. Instead of art being a moment making a connection between people over a painting or a book, it's full-blown capitalism from intellectuals who profess to know better and want better. You really get a sense of their attitude toward you: you're just an email address, a body to market to. I think this is partly a reflection of how cut-throat authorship is out there and, yes, part narcissistic self-regard. But it's what the "experts" are pushing in order to solve the problem of low demand and a plethora of product.

Full disclosure: I’ve been dutifully working on my brand but, to be honest, it feels ridiculous. But then is that now part my brand?