Books About Psychological and Language Borderlines

I've been very overdue on covering some of the books I read last year. I have a short little stack taunting me in my office. I didn’t want to just file them away (keep or garage sale?) until I mentioned them in some way.

One of the good things about contest submissions and their fees of late is that some publishers will now send you free books or subscriptions to their magazines as compensation for your submission fee. This is how I got the following two books: 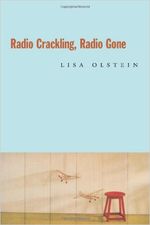 This book was one of my favorite books of poetry last year. Olstein makes a steady study of perception, border zones, edges, fences, ("a crackling on the radio moving into silence) and she does so with graceful particularness and narrative experimentation. She studies tipping points, sleep’s edge (in the same way Proust explored it), wind shifts, the cusp of change, “the tensile strength of the moment.” Often she does this by weaving ethereal narratives together into poems that become slightly haunting.

From "Dear On Absent This Long While"

"Yours is the name the leaves chatter
at the edge of the unrabbited woods."

When I made it half-way through, my notes say I was getting fatigued of exploring this idea. But then amazingly there were great poems after that, like the long poem "Guide to Self Hypnosis," "Parable of Grief" and "Metaphor Will Get You Everywhere."

This is a book however where the titles seem unrelated to the poems. 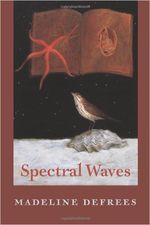 I usually like books by nuns and monks. So I was primed to like Spectural Waves by Madeline Defrees, 2006.

However, I didn't. The poems try way too hard to be smart and you find yourself in a tangle of obscure, italicized references. She’s also too conversational for my taste.

An example from "The Visionary Under the Knife"

"…The needle stops. The doctor inserts a foldable silicone lens, courtesy of
Bausch & Lomb. The surgeon
checks the wound for leaks."

The language feels flat as opposed to simple and the line breaks don’t seem very interesting. Also, the day-to-day content didn’t draw out anything spiritually or philosophically relevant. There were no lessons of language. She seemed to have the confidence of knowing without searching.Toward the end of the book there is a crown of sonnets about Elvis. Since I love sonnet crowns and pop culture poems, I felt sure to like this, but again I didn’t. 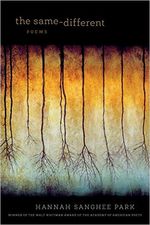 The Academy of American Poets sends members a book every year, the winner of the Walt Whitman Award. For 2015 it was the same-different by Hannah Sanghee Park. Rae Armantrout was the judge which gives you a hint that this book might end up being the same-different language type fun.

This statement is false.
This falsity true.”

Poems are word play and etymology fun although some of it's make-believe etymology. There are playful, lazy hearings and cliché weaves, folk tale riffs, muses on the jackalope. I have to say her endings always feel good but I didn’t check a single poem to re-read later.

The book is oddly designed, too. Only every other page had page numbers printed like this “22/23.” I guess it’s the same different as well.