A Book About Paradox, Surprise and Uncertainty in Poetry Craft 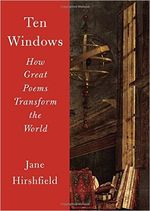 Just like the book Nine Gates (which I reviewed in 2014), I loved this book of Hirshfield essays although they were difficult. Did the book live up to its subtitle? Probably not but maybe it's a miracle the book had a subtitle at all considering the nebulous, ethereal subjects they explore. This book is not really for beginners; it’s strategy is so particular and pensive and one which requires good amounts of concentration.

Here is my take on what the essays cover and a quote from each section, although I don’t think cover is really the right word, more like "make exploratory expeditions into."

“Poetry’s generative power, then, lies not in its ‘message’ or ‘meaning’ nor in any simple recording of something external to its own essence. It resides within the palace of its own world-embedded, intertwining existence.”

“…the narrow alleyways of rhetoric, the differing fatigues of failure and success. There is no way of telling in advance what part of our knowledge will be needed at any given moment.”

3.  An introduction to Basho

“Basho’s haiku describe and feel, think and debate. They test ideas against the realities of observation; they renovate, expand and intensify both experience and the range of language.”

4. The idea of the hidden in poetry

“The union, like all metaphor, brings revelation and addition, while it also covers, complicates, veils.”

“For those willing to let themselves feel it, any story leaves behind an uneasiness, sometimes at the center, other times at the edge of perception, and like the remainder left over in a problem in long division, it must be carried. Literature’s work, and particularly poetry’s, is in part to take up that residue and remnant, to find a way to live amid and alongside the uncertain.”

“…a window can coincide with the poem’s emotional center of gravity and pivot.”

“Cognitive and creative discoveries are made in the same way as much of biological life is: by acts of generative recombination. Disparate elements are brought together to see if they might make a viable new whole.”

8. What is American in Modern American Poetry

“…there is the migrant traveler’s perennial hunger and search for what can be made known, made home, that leads American poets, more often than not, toward the respite and sustenance of the local and radiant detail.”