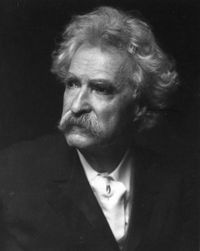 Fisticuffs: Mark Twain and Vanessa Place Endure Black Eyes While Confronting (Sometimes Their Own) Issues About Race in America

Sometimes the literary community is so up its own derriere that it makes it hard to sort out what's what.  Vanessa place, described in articles as an academic, white woman, has been doing a performative literary project around the text of Margaret Mitchell’s Gone with the Wind, specifically the racist parts (although she’s slowly tweeting the whole damn thing), to question whether the heirs of Margaret Mitchell should be making money off of a work that has come to be seen as very racist.  A backlash occurred from allegedly from both black and white communities and Place was let go from a judging position with AWP.

Aaminah Shakur from Hyper Allergic tries to explain, "why a white poet should not be attempting to reclaim the 'N-word'"  claiming that Place is “someone engaging in offensive racism and Blackface.”

First off, I'm confused. Why do we accuse Place of perpetuating racism for a performance piece trying to alert us to the continued profits derived from racism?  Is Shakur misreading the piece? Or refusing to read it on its figurative levels.

Let’s start with the piece. Place is tweeting the entire novel to try to get the Margaret Mitchell heirs to make attempts to stop her in the name of copyright infringement. This will force them to admit they’re making money off the racist novel. Honestly, all this is small fish when you consider the money being made for Hollywood studios from all those classic movies made in the era of bold-faced racism. We live in a capitalist society. Nothing gets aired without someone making a buck. Sure, we can stop watching them. After all, those films get more and more disturbing each year. I went to college in St. Louis and for our first class in film studies, the teacher played us D.W. Griffith’s Birth of a Nation without any context. Cut to class two and we were all pretty offended by the racist parts. And this was in St. Louis, Missouri! In 1990! For those of you who don’t know, Ferguson is basically a suburb of the St. Louis metro area. So that was saying something.

But maybe we should be made to revisit sexist, racist, abusive history to remind ourselves that such things as bad human behavior are always on the verge of existence. Try to erase your past and you will be doomed to repeat it, don't they say? There’s a caveat that what we do when we revisit these racist spaces is to have a discussion about them in order to understand the insidious, sometimes hidden aspects of racism and how it works. Hopefully, this knowledge will helps us stop being racist. Many are accusing Place of not providing this context. However, she’s engaging in a somewhat stark performance piece. She’s not running a college forum.

The Daily Beast says that AWP’s particular issue was “unmediated quotes of Margaret Mitchell’s novel.” So okay, context would be better…well, I guess that depends on your performance piece. What I don’t understand is the accusation that Place can’t perform issues of race because she is part of academia (privileged) and a white person. The Daily Beast broke that issue down, saying “If Place lost one of her privilege badges—if she wasn’t white and an 'in academia'—would her attack on racism have more credibility?”

Do you see what’s happened there? Are you looking closely? Performing the piece has become itself a performance piece!

“I’ve been thinking about the ways this concept works for six years, so it shouldn’t surprise me that people who have thought about it for six days, or six minutes, have a different view of it,” Place said of her detractors, noting that her Gone With the Wind Twitter feed only had 1,200 followers and the petition had 2,200 signatures. At least half of those who signed it may not have even seen her project. “That said, the literary world does seem to take things pretty literally,” she added.

This literal/figurative disconnect must sound familiar to all Mark Twain scholars. We hear the same controversy and charge of racist leveled at Mark Twain for his depiction of Jim in parts of The Adventures of Huckleberry Finn and for the heavy use of the N-word (which also matches the issue with Mitchell’s tome). Most Twain scholars will tell you, (and if you read the figurative level of the novel you can see), that Twain’s project for the novel was to challenge racist ideas. These included slave-holding attitudes, Jim Crow attitudes and, in hindsight we know, some of Twain's own racism. Which is to say he was trying hard NOT to be racist but ended up being racist in parts of the book anyway.

Is that the worst thing that can happen? It seems to me the larger project for Twain and for all of us was the bare fact that he was trying to write through the process of becoming an anti-racist. In fact, much of his work supports anti-rasicm. The problem is he does this so imperfectly. Although his essay writing and political commentary was clearly anti-racist, his novels are too obscure. They’re not ever explicit enough in their racial messaging. At times he panders to racists. At other times, he confronts them with their inhumanity. He writes through it in the same way he writes through American Imperialism in Connecticut Yankee in King Arthur's Court.

The truth is Twain was born into a community whose cultural biases were racist and it took him time and effort to evolve his thinking away from those beliefs. He did what few of us have the balls to do, he worked through all this publicly. He was a once-poor, ultimately-successful white man imperfectly writing to address racism in America. The fact that his work opens up conversations about race every day, (which we say we need), seems lost on everybody.

Listen, people will always criticize controversial things they’ve never read, viewed or investigated, (heck, I do that with the Bible all the time), but that’s why I’m so thankful there are black scholars of Mark Twain who have read the books. Watch the Ken Burns documentary to see for yourself. Some people will also refuse to see the figurative level. Biological studies in mindfulness and meditation tell us know that some people have a physiologically harder time even seeing figurative levels. They consistently resist seeing metaphors, symbols and ironies working in any art piece. This is the same phenomenon I see happening with Vanessa Place's piece.

Black academics, black political leaders, social workers, presidents (!) have all been calling for national conversations about race and the response needs to come from everybody: black people who continue to experience racism on the street and white people who need to work through it within their possibly mixed and often racially one-sided communities. Yes, white academics should be the forefront in talking about race…even imperfectly. Maybe especially imperfectly. As if black discussions are race are perfect. They’re not. They’re full of personal bias and emotion, just like everyone else’s.

Our freakout over this piece just shows what mixed messages we continue to send. We complain about the dearth of white people writing about race. We say that white writers were stuck in an ignorant bliss of white privilege. White writers complain that they're too scared to dare to write about race for fear of being criticized and ostracized.  And apparently this is not an irrational fear.

I don’t think we’ve proven by any stretch that Place is a racist artist. But it’s a good question because it begs the next question: if you’re trying to expose racism, so what if you’re a racist. In fact, even better if you’re a racist. Because we can't have it both ways. We can't keep calling out the problem like a pack of victims and then villainize anyone who steps out to poke the monster with a small stick.

According to The Daily Beast, the AWP says, “The group’s work must focus on the adjudication of the 1,800 proposals, not upon the management of a controversy that has stirred strong objections and much ill-will toward AWP and the subcommittee.” Which is another issue in itself.

Can you even imagine an established literary group with some stones?

I don’t know Place personally or her work well enough to say what kind of character she is. I can say my interpretation of the work is anti-racist and I will support any white artist taking on issues of race. I don’t support  the clusterfuck of criticism we seem to be indulging in.

Ironically, this news story coincides with a Supreme court decision on a Faceook murder-threat trial and the difference between perception and intent and what necessary for a jury instruction in a criminal case. There's a difference between perceived threat and intent. What's more important? Which gets priority? It’s probably one of the more crucial legal issues of our time, what with scary Stand Your Ground laws and online bullying. Weighing these two points of view has real implications on our lives and for our work.

So you should take some time to really think about it.

Arguments about arguments, if you care to go there: http://www.thestranger.com/blogs/slog/2015/05/26/22275249/a-poet-defending-vanessa-place-equates-signers-of-the-petition-against-her-with-the-cop-who-killed-mike-brown (The Stranger)

Posted at 03:31 PM in Poetic Realities, Think Outside the Lament, Whole Life of the Poet | Permalink