« Twain and Place Endure Black Eyes While Confronting Issues About Race in America | Main | Poets in the News with Bill Murray, a New Poet Laureate, the Charleston Massacre »

Recipes for More Thinking in Writing 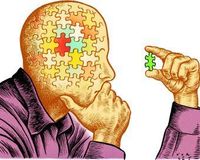 It sounds obvious and I’m always saying this but, nevertheless, writing is thinking and we have, over the years, managed to separate the craft of writing, (the lightly intellectual tinkering with words), from the art of keeping our critical thinking skills refined.

I was reminded of this reading The Miniature Guide to Critical Thinking by Richard Paul and Linda Elder who are from The Foundation for Critical Thinking. I received my copy of this booklet from the faculty admin trashcan at IAIA where it was addressed to a teacher long since gone.

Even if your poetry challenges some of the structures and assumptions of reasoning and logic, to write poems with no understanding of more sophisticated systems of thinking is to limit yourself, your poetry and your message. As they say, to break it well you gotta know how well it breaks.

But what interests me more, of course, is the narcissism of thinking you know it all already. In fact, that’s the big narcissistic mind-fuck of our modern age: we think we’re all pretty sharp scissors but such is part and parcel of our many self-delusions. Poets go even further with this affectation of their own brilliance. I’ve met quite a few who like to assume that because they write poems, they’re a type of instant intellectual.

Clarity: Is the writer clear on the issue being addressed? Does the piece lack elaboration? Remember the goal of this kind of writing isn’t language theory, it’s strictly, (relatively), successful communication.

Accuracy: Does the writer speak in true statements? Their example is “Most dogs weigh more than 300 pounds.” Some facts are indisputably false. Which is not to say there aren’t good poems out there full of 300 pound dogs.

Precision: Does the piece provide detail and specificity or does it deal in vague generalities?

Relevance: How do the examples bear on the issue? Is the point irrelevant?

Depth: Is the piece dealing with the most significant factors? Their example is the superficial response of the Reagan administration to drugs with the “Just Say No” campaign which failed to deal with complexities of the issue.

Breadth:  Does the piece address other points of view?

Fairness:  Is the piece written in good faith? Are Facts distorted, biased, tainted by vested interests?  “We naturally think from our own perspective, from a point of view which tends to privilege our position.  Fairness implies treating all relevant viewpoints alike…[this is] especially important when the situation may call us to see things we don’t want to see, or to give something up that we want to hold onto.”

Then the book delves into the Intellectual Traits. These, I find, are what many poets, (most artists actually), are lacking in socially if not artistically:

Intellectual Humility (versus Intellectual Arrogance)
“A consciousness of the limits of one’s knowledge, including a sensitivity to circumstances in which one’s native egocentrism is likely to function self-deceptively…recognizing that one should not claim more than one actually knows. [This is] not spinelessness or submissiveness...[but a] lack of intellectual pretentiousness, boastfulness, or conceit, combined with insight into the logical foundations, or lack of such foundations of one’s beliefs.”

Intellectual Courage (versus Intellectual Cowardice)
“Consciousness of the need to face and fairly address ideas, beliefs or viewpoints toward which we have strong, negative emotions and to which we have not given a serious hearing…recognition that ideas considered dangerous or absurd are sometimes rationally justified (in whole or in part) and that conclusions and beliefs inculcated in us are sometimes false or misleading …We need courage to be true to our own thinking in such circumstances. The penalties for nonconformity can be severe.”

[I’d like to add an addendum to my comments last week about Mark Twain. Sometimes the penalties of nonconformity can be ostracization from both sides of the issue, those whom you are defending and those whom you are fighting against!]

Intellectual Empathy (versus Intellectual Narrow-mindedness)
To imaginatively put oneself in the place of others in order to genuinely understand them...to reason from premises, assumptions, and ideas other than our own. Correlates with the willingness to remember occasions when we were wrong in the past despite an intense conviction that we were right, and with the ability to imagine our being similarly deceived in a case-at-hand.”

Intellectual Integrity (versus Intellectual Hypocrisy)
“[To be] consistent…[to] hold one’s self to he same rigorous standards of evidence and proof to which one holds one’s antagonists, to practice what one advocates for others, and to honestly admit discrepancies and inconsistencies in one’s own thought and action.”

[Were we ever rigorous thinkers, we Americans? If so, we’ve become fat and lazy thinkers, which brings me to…]

Intellectual Perseverance (versus Intellectual Laziness)
“In spite of difficulties, obstacles, frustrations…[and] the irrational opposition of others, to struggle with confusion and unsettled questions over an extended period of time to achieve deeper understanding or insight.”

Confidence in Reason (versus distrust in reason and evidence)
“…despite the deep-seated obstacles in the native character of the human mind and in society as we know it.”

The booklet also elaborates on the problem of Egocentric Thinking: “Humans do not naturally consider the right and needs of others…[do] not naturally appreciate the point of view of others nor the limitations in our own point of view. We become explicitly aware…only if trained to do so.” Otherwise, we’re left with “our own egocentric assumptions, the egocentric way we use information…interpret data…the implications of our egocentric thought. We do not naturally recognize our self-service perspective…As humans we live with the unrealistic but confident sense that we have fundamentally figured out the way things actually are and that we have done this objectively. We naturally believe in our intuitive perceptions—however inaccurate.”

There’s also a list of self-centered psychological standards from wish fulfillment to group think to innate selfishness. These self-centered standards are kissing cousins to the list of mental biases and 30 Poems About Suffering.

There’s also a brief section on Sociocentric Thinking: “Most people do not understand the degree to which they have uncritically internalized the dominant prejudices of their society or culture. This phenomenon includes the “tendency to blindly conform to group restrictions, (many of which are arbitrary or coercive),” and the failure to “distinguish universal ethics from relativistic cultural requirements and taboos.” It also includes the “failure to realize that mass media in every culture shapes the news from the point of view of that culture.”

These are mental processes which, if ignored, will affect the types of poems you choose to write and read and the quality of every piece you write. You can be a technically savvy formalist or labratory-poet, but if your thinking is lazy, we all suffer for it.