I haven’t made a post recently on poetry I've been reading. This is because I’ve been mired in New Mexico poetry anthologies. Report coming soon!

I visited the local CNM library in search of New Mexico poets. Didn’t find any. But I did find many Sherman Alexie works. Alexie is not a New Mexican poet but he is an American Indian poet from the Spokane tribe located in Washington state. Although Spokane is very different from the tribes of southwestern New Mexico, he does provide both profound and humorous insight into the American Indian Experience. I started with the oft recommended children’s novel The Absolutely True Diary of a Part-Time Indian. As described, it was excellent and a perfect place to start with Alexie if you’re a confused gringo. Truly, if you’re looking for Indian perspectives you have millions of alternatives. Natalie Diaz is a very hot Mohave poet right now. Joy Harjo is a perennial favorite of mine. But just check out this Wikipedia list.

I’m becoming really attached to Alexie in fact and the well-rounded way he talks about race reminds me of Richard Wright (just perused Richard Wright’s collection of haiku at the library). Like Wright, Alexie knows how to balance the complexities of race by using both good and bad characters from all sides. Good white people and bully white people. Good Indians and bully Indians.  And the badness that ensues when trying and failing to be good.

Similar Alexie stories occur in poems, short stories and the novels, like Grandma’s stolen powwow regalia which shows up in An Absolutely True Diary and in short stories from the collection Ten Little Indians. An Indian mother singing Donna Fargo’s "Happiest Girl in the USA" is another story that shows up in different fiction and poems.

The poems in One Stick Song (2000) are also a good introduction to Alexie with poems like "Unauthorized Biography of Me," "An Incomplete List of People I Wish Were Indian," "The Mice War," "Sex in Motel Rooms," "Powwow Love Songs." In his stories and poems, Alexie can describe both Rez life and city life. What I like about his poems, they’re all different in tone and format.

The Business of Fancydancing,  (1992), contains poems that are a little rougher. But worth reading are "War All the Time," " Misdemeanors," "Missing," "The Reservation Cab Driver," and "Giving Blood." Alexi is good at setting the scene and giving you a tight kick in the pants. 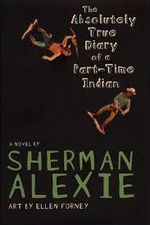 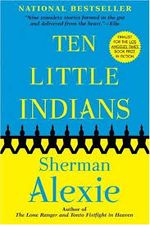 Posted at 07:03 PM in Books to Read, Today's Pillar of Poetry | Permalink