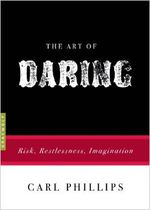 For all the talk of poetry being invisible in big media stories, I am continually finding really good features and news stories on poetry  and poets in the major American (and UK) newspapers.

The Art of Daring

"In August of last year Graywolf Press released the tenth volume in their acclaimed "Art of" series, this time authored by poet and four-time National Book Award finalist Carl Phillips." (The Huffington Post)

“The Triumph of Bullshit" by T.S. Eliot

"TS Eliot, once a subversive outsider, became the most celebrated poet of the 20th century – a world poet, who changed the way we think. Yet, fifty years after his death, we are still making new discoveries about him." (The Guardian)

"Fifty years later, “difficult” remains the word most people attach to his verse. Yet we quote him: “Not with a bang but a whimper”, the last line of Eliot’s poem “The Hollow Men” is among the best-known lines of modern poetry. “April is the cruellest month” begins The Waste Land with unsettling memorability; no reader forgets the strangeness of the “patient etherised upon a table” at the start of “The Love Song of J Alfred Prufrock”."

"Through allusion, quotation, echo and resonance, modern life is presented as a repeated ritual, one we can hear more deeply than we see it. To a greater or lesser degree, this is still how poetry works. It’s not so much that knottily difficult poets including Geoffrey Hill and Jorie Graham embed one resonance within another as they write, as that even poets very different from Eliot inherit an acute self-consciousness in their language. Poetry manifests an awareness that language – in its play of sound as much as in its denotation, its meaning – spools and unspools the self."

The Web Poet's Society: Can an online course revive interest in the classics?

"Skeptics of online education still question if academic subjects, let alone poetry, can be taught on the web. They stress that true scholarship takes patience and time—values that aren’t inherent to online education. Even though many MOOCs offer certificates of completion, only 5 percent of of those who enroll actually stick to it. And, despite their popularity, both UPenn and Harvard’s poetry classes have experienced high dropout rates as well.

But Filreis suggests that the courses’ objectives are more important than their measurable outcomes. ModPo, he said, isn’t about the number of people who complete it—and it certainly isn’t designed to replace a traditional college seminar. After all, data indicates that most of the students who sign up already have some formal higher education under their belt. Rather, ModPo—and Poetry in America—are about reaching more minds and opening more people to the possibilities of language. They're about finding Whitman not only under boot soles but on smartphones, too."