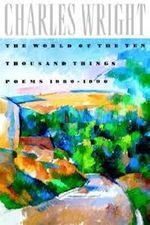 I've been sitting on this book, The World of the Ten Thousand Things by Charles Wright, for about 17 years, moving the book from New York to Pennsylvania to California (3x in California alone) to New Mexico (3x there, too). Finally I buckled down to read it and, like many things you put off for so long, you realize you should have read this years ago. But would you have loved the book's ghostly vagueness 17 years ago. Definitely not. So you then realize you've carried this book around so long waiting for the "Wright time" -- as it were -- to read it.

I'm working on a novel about the ghosts of a dying western town so of course this book's poems about the dead attracted me. Years ago I may have found Wright's poems difficult and distant, too much well-readedness on his sleeve, the type of thing Helen Vendler and Hart Crane would like...and my friend Teresa who loved Hart Crane and Jorie Graham and recommended we go to the poetry reading at the 92nd Street Y in New York City to see Graham and Wright read. This is where I bought the book long before I was ready for it.

Wright gets at that under-layer of nature poems, the almost gothic, elegiac layer of it...without coming across as completely Southern gothic. The books is also full of poems about artists (Cezanne a favorite), incidents of mysterious beauty. His thoughts flow about seemingly unedited. He experiments with variations: variations of self-portrait experiments, variations of journaling (one poem written over a calendar year). There is a lot of religion here: transfiguration, crosses, sin and plenty of nature's surreality and landscapes that undo us, abstractions of the seasons. In this way the book felt like a giant (and I mean giant) haiku.

The poems fly across the page in indents and with parentheticals. There is plenty of high-culture here too: music, painting, wine. He takes lots of car drives, invokes the act of licking a lot.

True, Wright often gets lumped with the language poets and he admits, "Language can do just so much" but there is plenty of aboutness in his poems, plenty of scene, plenty of voice. There's almost a sense of a man in early 50s midlife crisis here.

I've lost touch with Teresa 15 years ago...but I can still hear her reading excerpts of these poems to me.

From "Composition in Grey and Pink"

The souls of the day's dead fly up like birds, big sister,
The sky shutters and casts loose.
And faster than stars the body goes to the earth.

Head hangs like a mist from the trees.
Butterflies pump through the banked fires of later afternoon.
The rose continues its sure rise to the self.

From "A Journal of True Confessions"

The new line will be like the first line,
spacial and self-contained,
Firm to the touch
But intimate, carved, as though whispered into the ear. Likewise I loved Adobe Odes by Pat Mora. I found out about Mora from a book on Southwestern literature and art. These odes are done in the spirit of Pablo Neruda (she even includes an ode to him) but they are fabulously about New Mexican subjects. My favorite ones were odes to adobe, guacamole, kitchens, chiles, chocolate, names, the cricket, tea, toes, bees, apples, church bells, and cottonwoods. I also liked some of the idea odes: desire, hope, courage.

Some of the odes wander a bit far from their target (ode to Santa Fe) but Mora knows what it takes to make a good ode, scrumptious and tactile language. I'm going to give this book away as a gift for my friends in New Mexico and my friends who love the state, but live elsewhere.

A few weeks ago I also read Mora's book Aunt Carmen's Book of Practical Saints which is similar but about ode-like explorations of Catholic saints. 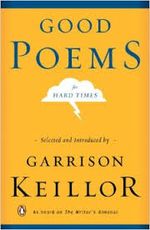 Good Poems for Hard Times." I got this book used and it was one of my bathtub poetry books. I need variety when I'm reading in the bathtub.

Having has so many hard times in New Mexico, I was expecting to like this anthology more than I did. I just don't think Garrison Keillor (the editor) and I have the same rubric for either hard times or good poems.

However, there were enough good poems in here for me to justify keeping this book on hand:

and some poems that I feel would be very moving at a funeral: 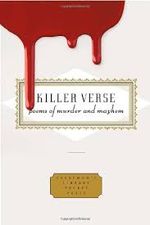 The Everyman's Library of Pocket books puts out these little novelty poetry anthologies that I'm always wanting to buy: ghost poems, Irish poems, jazz poems, comic poems, Christmas poems. There's a ton. The only other one I have is Zen Poems which I did not love.  Because I'm working on a novel with a murder in it, an anthology of poems about murder seemed necessary to read. And so I bought Killer Verse, poems of murder and mayhem. Loved it!  Sections are divided between family murders, murder ballads, Vers Noir, the inner-workings of murders, psycho killers, victims and meditations on murder. You get both old and new here, from anonymous ballads to Robert Browning to Marie Howe.

For years I've loved the segment of The Sonny & Cher Comedy Hour where Sonny & Cher sang called  "Stagger Lee" (famously done by The Grateful Dead) and in this book I came across the poem from which is was based: "Stackalee."