Movies with Poetry: The Life & Times of Allen Ginsberg 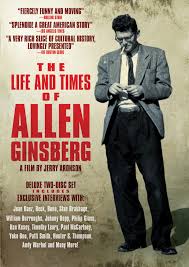 Last year I went through the Geencine  library and marked for my que about 20 art and poetry documentaries.  The Life & Times of Allen Ginsberg (1993) is pretty basic. No fancy editing or music. It's no Searching for Sugarman. But enjoyed it nonetheless and learned much about Allen Ginsberg, mostly from interview footage of Ginsberg made specifically for the documentary.

Luckily, I saw Allen Ginsberg read twice in New York City before he died in 1997.  Both times he performed "Put Down Your Cigarette Rag (Don't Smoke)" which was a very funny poem as I recall it. But I have to tell you, I wouldn’t have gone to see Ginsberg read if my friend Julie hadn’t arranged it. Julie went to as many concerts, readings and events in New York City as she could and she often counteracted my shut-in-tendencies.

I don't know why I've never been much of a Ginsberg fan. Watching this video I surmised my hurdle must have been his buck teeth and fat lips, a pretty shallow reason indeed. I also think I assumed, as the king of all hippies, he was going to be untouchable and maybe somewhat spaced-out. The movie showed me he was neither out-of-it or full of himself.

The film chronicles his life with his own photos and in his own words with important interviews from his brother and step-mother. We also see footage of appearances at rallies and on TV  shows like William Buckley's and later Dick Cavett's.

Watching William Buckley's obvious distaste for Ginsberg, it occurred to me we've traded someone like Buckley for Rush Limbaugh. At least Buckley didn't echew intellectualism. We were better off with Buckley.

Ginsberg talks at length about his mother’s mental illness and how it affected him, how this produced his sympathy for "people in trouble." He says he inherited a kind of "poetic paranoia." We also learn about his father, poet and teacher Louis Ginsberg, how close they were and how his father influenced his poetry. We see footage of a poetry reading they did together.

The film also covers  interviews with the other Beat writers William Burroughs and Herbert Huncke. Jack Keroac and Neal Cassidy are discussed. Ginsberg talks about what they all contributed to the group, how they would meet at Foster’s Cafeteria.

Throughout, Ginsberg seems concerned with the social aspects of being a poet and writer. We can see how this would evolve into social protest. In this film, he's called a cosmic social worker or cosmic public defender. 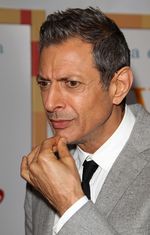 I kept noticing how Ginsberg would talk and rub his chin and beard with his fingers. I couldn't remember who this reminded me of. Then it came to me: actor Jeff Goldblum does this!

We hear clips of Ginsberg reading "Howl" then and now and there's a long segment and reading of "Kaddish."

There are also interview clips with Abbie Hoffman, Joan Baez (who called Ginsberg colorful but serious), Ken Kessey and Tim Leary. We learn when Ginsberg met Dylan and how he ended up in the movie Don’t Look Back.

The disastrous 1968 Democratic convention in Chicago is addressed and Ginsberg describes how it turned to violence. He calls the event a liberal failure and says the blood resulting from the remaining years of the Vietnam War are on the hands of the right and the left (due to how this event resulted in the election of Richard Nixon).

We see Ginsberg doing Buddhist chanting and learn about his involvement with Naropa University and his study with Chögyam Trungpa and how Ginsberg started (with Anne Waldman) the  Jack Keroac school of poetry where students study "spontaneous babbling."

Ginsberg also talks about his personal relationship with Peter Orlofsky and the lessons he had to learn about co-dependency. He talks about the death of his parents.

His Stepmother expresses amazement that Ginsberg can write about his life as it happens, as if he’s releasing his feelings "along the way." She says his father was very proud of him and that he was a good son.