A Book About Womanhood; A Book Doing the Work of Zen 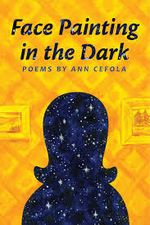 Full disclosure: Ann Cefola and I graduated from the same MFA class at Sarah Lawrence College. Looking back, I’m usually discouraged to find less and less of us are still working as writers.

W. H. Auden once made a prediction about successful writers: not one who has something burning to say, but one who is in love with with language. I find this to be a true measure of my MFA friends. Those who have continued to write are in love with words and sentences. Also, the successful writer is compelled to keep going, compelled to keep writing whenever they can. They don’t make excuses about having no time or inspiration. Their time is sacred to them and they defend it. Ann Cefola has kept going and she has been an inspiration to me. She’s kept working on her poems, on poetry newsletters and blogs. She’s published two chapbooks and now a first collection.  Over the 14 years I’ve known her, she’s kept on keepin on and she’s encouraged me to keep on, too.

My reading of her work has evolved over the last 14 years. Her poems are tight and her juxtapositions are advanced. Reading her now I see the art of containment and the order of her constructed phrases. Her poems sometimes feel like incantations in their brevities. The juxtapositions between poems are particularly good in the new collection so that even the older chapbook poems feel new.

I am beginning to see her phrases like very particular paint strokes, cerebral leaps. I have always loved that her poems express a kind of thinking in process.

There are many new, explosive poems in this book...the poem about Picasso's “Demoiselles” being one example, a conversation with the subject of the painting, the women. Full with very smart allusions and juxtapositions, Ann and the divas work through history's responses to the painting. I've recently read about two types of feminism:  that which deconstructs and that which reconfigures (or revamps) the situation of being a woman. I feel this poem does both, comparing the Demoiselles to WNBA players and ending with the incredible line,  “I am just a girl writing.” This poem blew my head off.

I found many exciting transgressive strokes all through the book. There are poems about identity and making ourselves up, poems about New York City, office spaces, a really unique 9/11 poem, a veritable stroke of a "before."

"A live hand across two world wars
astounded and mourning between lines
your point sharp, your No. 1 pencil so delicate,
so willing to be erased."

From "Express," a poem about taking the train into the city:

This time around, I notice Ann's 3-4 word phrases that are very tight and feel like assemblages that build to a mood. Ann also knows and uses the power of punctuation.

"Soul braces, Here we go. No cheers:
Cold city street. People rushing to trains,
What will happen to me? – I don’t know, sweet pea?"

Ann also captures the spirit in the suburbs. Fro the poem "Price Club"

“I want transubstantiation, to be taking up in cornflakes.”

She artfully weaves a phrase through the poem "North by Northwest" and "Anthem" is a lovely meditation on the afterlife of an ant. Time after time, Ann puts herself in wildlife poems.

I highly recommend this first collection by Ann Cefola. 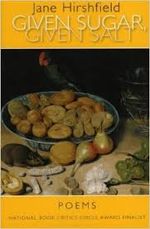 Given Sugar, Given Salt by Jane Hirshfield, 2001

I found this book at my local library recently and thoroughly enjoyed her poems of noticing and mindfulness, which I realize is not for everyone. If you've ever engaged in any Buddhist practice, you might love these poems, too.

Hirshfield has a particular quietness like watching monks chop wood or chop carrots. They are full of small rituals, meditations on choice. She expresses a kind of spiritual movement and stasis.

In structure and tone, her poems remind me of other lyric poems of the 1990s. At one point her sister asks, “Does a poem enlarge the world, or only your idea of the world?”

My favorite poems here deal with existence and changes. Hirshfield's book contains an ant poem, too: “Like an Ant Carrying Her Bits of Leaf or Sand”

"The ant’s work belongs to the ant.
The poem carries love and terror, or it carries nothing.”

In "The Room" Hirshfield expresses a fear of new love with the act of preparing the house for a new guest to come and then the  “shivering hopes” that “follow it in.”

"One takes a bit, then the other.
They do this until it is gone."

This is the work of a spiritual practice. In "Rebus," she talks about the red clay of grief and asks "How can I enter the question the clay (grief) has asked?”

For me, some of the poems in the middle are vague. There are many contemplations of objects: buttons, pillows, carpet, an onion, a rock, clocks, ink. She is exploring thusness.