The Poets of the University of New Mexico

After a few years working on this blog, I've seen some patterns emerge in the kinds of poems I have been enjoying:

Books I find when traveling by poets who write about the local area, faculty poets; interestingly faculty aren’t always writing about where they’re currently teaching, as my following examples show.

I found the following two books at the University of New Mexico bookstore in Albuquerque. 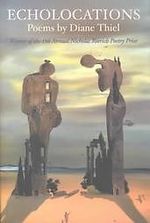 Considering the surreal, archaeological cover, the stark title, the fact the publisher is Storyline press, and the precious photo on the back cover, I was expecting this book to be 100% saturated with white-privilege. I thought this was going to be a very white book. Well, it is and it isn't. In it's own way, it's as much a book about race as Patricia Smith's book, Shoulda Been Jimi Savannah (2013).

The poems are threaded with German words and phrases and Thiel explores the language's impact on her. Many important lines are in German, not just superfluous drops for atmosphere.

It reminded me of the crucial lines of Spanish in Bless Me, Ultima, (a novel about northern New Mexico I just finished and loved). My copy of Ultima includes no translations of the Spanish and they appeared too often for me to look up constantly). I did go through the effort of decoding the German, however, with the help of Monsieur Big Bang. Later I discovered the translations were available in the back of the book as notes.

Thiel's poems deal with the legacy of her German heritage in fairy tales, her father’s violence, and Holocaust guilt. It is a Storyline book with a Dana Gioia blurb on the back , so I wasn't surprised to find forms in the book. Thiel is actually good at them, her rhymes are unobtrusive and loose. The poem "Changeling" is a light-sounding lyric about World War II that reminded me of W. H. Auden. The books sections are very neat and the book has a very collegiate feel all around.

I read this book directly after Patricia Smith’s book (and I just remembered I have a cousin named Patricia smith). While Smith details her childhood in black Chicago, Thiel's takes place in a very white-seeming Miami. Their childhood experiences are starkly different. At points you really see evidence of white privilege in Thiel's poems, the privilege of not having to consider your race in your day-to-day life. At other times Thiel is very concerned with race and her inheritance as a German which carries its own baggage.

Smith uses very dense and sophisticated language, arguments and connections, all describing an  impoverished urban landscape. Thiel’s poems are very collegiate but constructed more simply.  Smith is less European influenced. Her music is Chicago and American. Both of these poets are very smart, eloquent writers; but the world you see under their capes is amazingly different.  Thiel talks about doing projects about Dante’s Inforno in gifted glass and loving the band Styx. Smith talks about walking to school in the cold city and the lewd cat-calls from the boys. Interestingly, both respond in verse to Barbie dolls.

Thiel has burning secrets Smith doesn’t have, references Ovid's Thisbe and gives us Auden quotes. She writes about the beginning of the unraveling of a relationship in "Florida Turnpike:"

Near our exit, the car drives through a sea
of yellow butterflies crossing the highway.
I look at you to see if you have noticed
how fast we're moving--when the first one hits
the windshield with the impact of a fist.

I enjoyed her poems dealing with the world of poetry, how to avoid men with certain books of poems at their bedsides. Even her garden poems, which you fear might be precious, avoid sentimentality. In "Event Horizons:"

Ask any poet--
you can die from it,
even after eating
your companions.

"History’s Stories" uses a form that repeats the last sound of a line twice before launch into the next line. Does anyone know what this form is? Here's a sample:

For her song and flight, Echo is torn apart,   art
flung limb by singing limb. Each valley swallows,  allows

Another nice surprise were her anthropology poems, the best of which was called "Miami Circle" about believing archaeological finds are part of exotic places instead of things you find in your own backyard.

This reminds me of what I consider my least favorite genre of poems, poetic tourism and it’s intellectual condescension. 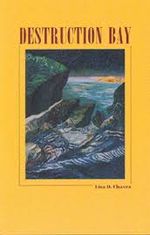 Destruction Bay (1998) by Linda D. Chavez  sat on the shelf inexplicably in Saran wrap. And I didn't like the book at first, didn't love the what felt like meaningless line breaks, typical of poems from the 1990s.

But soon I found plenty to like about this book:

- We find early evidence of the new angry girl;
- I love the movement of the sections;
- This is a woman’s take on loves dangerous, unflinching violence--even in the tender ones, love is described as snake.
-  Chavez works on poems of place; she contrasts her arctic Alaska with a  tropic vacation in  "Winter Storms," using water imagery and ending with "the luminous bones of whales on the ocean floor." The last poem contrasts her beloved Alaska with her new life in the desert.

In "The Poet Surveys the Wreckage of Her Life" we get a great list poem on non-poetic objects. Chavez's poems are gritty but this is an owned grittiness. Again, I'm always suspicious of poet-tourists who try to write about “the common people."  As the song "The Common People" goes, "Everybody hates a tourist."

Her titles are solid, literally like blocks of ice or thick walls to keep out the cold.

Like Patricia Smith and Diane Thiel, her mother poem(s) are striking. "Of Ivy and a Plum Tree" talks about her mother’s search for love mapped to the idea of tending an impossible garden. Chavez draws out specific emotional moments of relationships. "Rain at the State Line" like Thiel's "Florida Turnpike" marks the moment where a relationship starts to unravel:

They will meet the rain
at the state line, drive into it,
sadness settling on them
like an old coat.

There's a section of Paris poems about her grandmother missed future, the poem "L’Heure Bleue" is about the same ambient light Joan Didion talks about in "Blue Nights." Like Patricia Smith, Chavez deals with re-conceptions of beauty in "The Unveiling of the Paris Collection, 1926," and about being an Alaskan, an Chicana/Mestiza and a woman in dangerous situations. Her poems are full of conflicts of childhood and young adulthood and love's cold violence.