« Poems Found in Truth or Consequences | Main | A Book About Race » 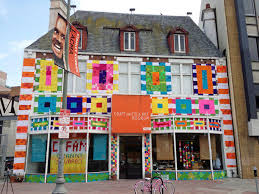 Although Los Angeles has always had an intellectual and artistic inferiority complex in comparison to New York City, having lived in both placed I find Los Angeles a highly competent art and book town, maybe even slightly smarter, truth be told.

Years ago, at an LA Times Book Festival symposium on something or other, I witnessed a New Yorker who stood up to tell us what a refreshing experience the LA book festival panels were and how in NYC intellectuals would be falling over each other posturing and posing. He felt LA intellectuals were more honest, open and for real. I agree. It's as if their inferiority complex makes them more honest.

LA has a vibrant art scene and this is why I love getting articles confirming my understanding of its vibrant culture, like the one about yarn bombing.

Artist from all over the world crafted kitted squares to bomb the LA Craft & Folk Art museum, which sits in the shadow of LACMA and the Page Museum in Los Angeles. The act of public art was designed to challenge street art as a masculine space and explore the idea of“who gets to belong in a public space.”

I also love the Riot Grrrl, Third Wave Feminism aspect of the bombing, girls taking back knitting: “By putting craft our in the public, we’re challenging the history of craft as well as the culture of street art that has a lot of embedded sexism.”

There is a “wealth of public art and performance collectives, such as Fallen Fruit and the Los Angeles Urban Rangers” and what Carol Zou describes as “grassroots arts projects happening …There’s a culture in L.A. of artists getting together and forming their own organizations from the ground up.”

Los Angeles is known for pop culture production but few give the city credit for its art and intellectual production. 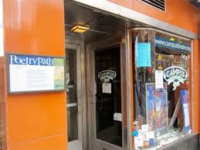 I also received a brochure from The Stadler Center for Poetry at Bucknell University in Lewisburg, Pennsylvania. Buckneell is doing something called The Poetry Path, its first public art project consisting of a walking tour of historic downtown area. The locations are marked with poems and recordings by poets at ten markers that feature a poem chosen for its thematic and cultural resonance to the site.

All towns should be doing this!