A Book About Race 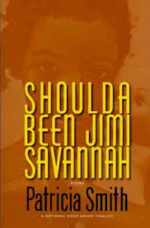 Just when I finish a terrible eBook, I have another great experience with eBooks. After reading about this book in American Poets magazine, I purchased the eBook of Shoulda Been Jimi Savannah (2013) by Patricia Smith.

Can I say, Coffee House Press does a great job with their eBooks. And they price them reasonably under $10.

It's one of the best books I’ve read over the last three years, up there with Natalie Diaz's book, My Brother Was an Aztec. They're both great modern books dealing race.

Smith's book also is full of penetrating family characters and covers the migration of southerners to Chicago, or rather Black Chicago. Interwoven are stories about Motown's artists and Altantic artist Aretha Franklin.

Her very baroque, word-strewn poems come in dense lyrics and include the occasional forms. In some, you could hear the echo of a slam performance. And yes, Smith does have history as a spoken-word performer.

The pieces are tinged with bitterness and topics cover tween growing pains, beauty, body image, race, and culture. Smith's mother poems are particularly memorable as are her pop-culture pieces, culminating in a crown of sonnets about Motown. We find there The Supremes, The Temptations, Smokey Robinson, Little Stevie Wonder, Lady D (Diana Ross), Mary Wells, and The Marvelettes. Later in the crown we confront being starstruck, encountering pop-star hasbeens, the bait and switch of a troubadour's promises, and the very unromantic ends of star crushes.

To read more about Patricia Smith: