Summer Wrap-Up: Poets in the News 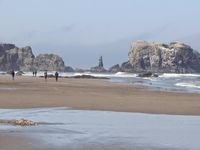 It's been a crazy summer! I've either been hosting guests or traveling since early June. I've been tooling around in New Mexico (Truth or Consequences, Manzano Mountains, Albuquerque as a tour guide) and Oregon (Bandon-by-the-Sea) for a family reunion (mother's side), then have been chin-deep sunk into projects and job changes. More on my summer adventures and pictures.

Meanwhile, I've been collecting a slew of poetry things. Some news I've been reading:

My friend Christopher sent me the LA Times story about the passing of poet Maxine Kumin, who died in February. I also found a Kumin tribute online from Carol Muske-Dukes.

Christopher also sent me an LA Times story about the passing of Maggie Estep, one-time MTV poet and performer at Nuyorican Poets Café and the Def Poetry Jam, who also passed in February.

He also sent me an LA Times piece on Richard Blanco, most interesting for a section at the end comparing about how Cuban relatives respond to poetry versus how Americans do.

“But is it, you may be wondering, good? No. But neither is it entirely bad…the sort of collection written by reasonably talented MFA students in hundreds of MFA programs stretching from sea to shining sea.”

“...Franco has a decent ear for speech, but a bad sense of the poetic line…He’s prone to phrases that sound good at first but collapse under scrutiny…[but] God knows he can write circles around Billy Corgan.”

It’s easy to sympathize, even if one suspects some of the complainers are no better at writing poems than Franco is. Yet the annoyance this collection will inspire is rooted in a deeper anxiety: The attention commanded by James Franco’s poetry has everything to do with “James Franco” and almost nothing to do with poetry. And that cultural wealth is not transferable. Attention withheld from Franco’s poems will not instantly devolve upon some worthy but obscure poet; it will go to another actor, or singer, or commercial nonfiction writer, or memoirist — or even to James Franco in his novel-writing incarnation. Poetry is the weak sister of its sibling arts, alternately ignored and swaddled like a 19th-century invalid, and that will change only by means of a long, tedious and possibly futile effort at persuasion. Perhaps it’s a blessing to have James Franco on one’s side in that struggle.”