« Walking with Poetry | Main | Is Reading Dead? Does Poetry Matter? Should Life Be Art? » 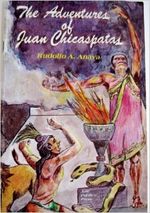 I haven't been blogging much this summer but I've been doing a lot of reading.

Anaya is famous for writing Bless Me, Ultima, which I am halfway through. This book is a somewhat short mock epic poem. The book (Arte Publico Press) had typos, confusing typos, typos that took me out of the action, which was full of witches, women, swords and switchblades and two brothers who want to be folk heroes. I didn't love it like I'm loving his novel.

The Poets on Poetry series' Poetry, Truth, Autobiography and the Shape of the Self by Carol Muske (before she was Muske-Dukes).

Having lived in LA for eight years and attending many of the fabulously intellectual panels at the Los Angeles Times Book Festival, I would see Carol Muske-Dukes speak often as one of the iconic LA poets. And I loved her memoir, Married to the Icepick Killer: A Poet in Hollywood about poetry in LA and her life with actor David Dukes (you might remember him as Edith's would-be rapist on All in the Family).

This is compilation of some of her book reviews. Muske-Dukes is a second-wave feminist but this book in not an overarching study on women or feminist poetry, although most of the female poets she reviews are second wave feminists.

An excerpt about mistrust of meaning:

“Ironically, similar perceptions about language among certain French critics and thinkers (all male) led to mistrust of language’s capacity to express anything accurately—leading to “terrorism” in literature, to the “literature of silence,” to Maurice Blanchot’s statement that the goal of language is “its own suppression.”

About the battle between poetry schools:

“The word crisis is, alsas, sorely familiar to the reader of contemporary American poetry. Indeed, the terrain of poetry has been commandeered as one of the battlegrounds upon which literary skirmishes representing larger culture wars are routinely fought. We have weathered a storm of aesthetic/political blitzkrieg: McPoem, neo-formalism vs. free verse, the Death of Poetry, lyric vs.narrative, feminism vs. phallocentrism, The Canon vs. Multiculturalism, the Balkanization of Poetry vs. Eurocentrism, the critic vs. the author, Poetry Slam vs. The Academy, and Harold Bloom vs. Everybody.

Another essay continues along the same vein:

…the “us and them” of American culture, that is something in us that really does love a wall, a fence, a line drawn in the sand; something anti-intellectual that casts a suspicious eye on the “generalist.” 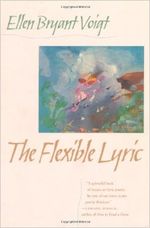 My friend Ann sent me this book years ago, Ellen Bryant Voigt's The Flexible Lyric. For me, this book was hit and miss. She sets up her essay points very argumentatively. Stephen Dobyns says this so I would say something else. That continual combative set-up made it hard to connect with this writer. I felt that unspoken chip on her shoulder.

But there are many interesting things here:

She talks about having poet idols and about her readings of Elizabeth Bishop and Flannery O’Connor. She disputes the idea of women’s poetry- with a special critique of Alicia Ostriker's Stealing the Language, an argument I was not inclined to follow because Ostriker's book gave me an epiphany about myself as a woman writer (after years of hesitation in believing in such things as women writers).

But I loved her essay making the case for adjectives (in combat with the modernists). Her essay on images was too dense for me and I daydreamed through the one about tone. Some of these essays are really dry. dense and closed. Her essay on the narrative running through Southern writers was good, particularly discussion on Edgar Allan Poe's "The Raven" which reminded me of the reading by Lisa Simpon and James Earl Jones.

She has a 60-page defense of lyric organization vs. using "an arbitrary form" with illuminating examples of Shakespeare and sonnets. She talks about textures of lines and list forms. There's also an essay on Philip Larkin. 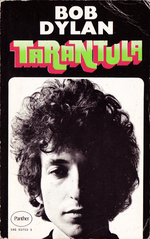 In my continued quest to work through books of celebrity poetry, I took on Tarantula (1971) by Bob Dylan. Although I recognize that Bob Dylan is accepted as the only true poet among songwriters, I dreaded reading his poetry, tried of all the Beatles/Dylan hoopla of the last three decades. Although I like The Beatles and Bob Dylan, I'm tired of the hoopla.

However, I have to say (so far), hands down Dylan is the best celebrity poet. I guess this is not surprising since many of his songs stand up as poems, at least this is what poet Billy Collins tells us in the introduction to Dylan's other book of poetry, Hollywood Photo-Rhetoric.

No...Tarantula is good because it's experimental in a way that sometimes produces interesting results, characters and narratives. He does a much smarter playing around than most celebrities do.

And speaking of celebrities, he's as celebrity obsessed as the rest of us. Tarantula is stuffed to the brim with late 1960s celebrity references. I actually created a list.

What I liked about the book was the mass of words (sometimes free associative working into a real story) inter-cut with some very funny verses. Even when he is enigmatic, he is still interesting. There are some very funny sign-offs to the verses, all which are done as unique personas. There are also interesting and irreverent titles, one reusing the term "jingle jangle morning." Some of the prose pieces form and some don't. But there are bits that are prophetic.

--it’s every man for
himself—are you a man or a self?

There are some uncomfortable racial usages (similar to in Jim Morrison poems of the same era): references to geisha girl, coon, queers, faggot, and dykes. Yikes! It's hard to tell in these moments if Dylan is critical of those words or using them without irony. 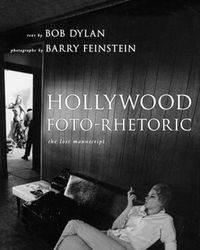 Bob Dylan must have a messy house because he's always losing manuscripts.

These poems were inspired by photos Feinstein took of Hollywood scenes in the 1960s. There are a scant 23 poems in the book that Dylan hesitates to call poems.

“If they are poems, or if they are not poems…does it really matter?”

The poems have no titles, punctuation, and use some spelling short cuts like using yr for your. The poems overtly about actors are the most interesting.

“you are acting all the time/even when you’re playing you.”

Yes mama, I’m an actor
the difference being my contradiction
that I
do not really wish t be remembered
for my smile
but in compete reversal
as I look around
I realize
that I will be.

The pieces on Judy Garland seem too bullyish and mean-spirited. But there are good conversations between the photos and poems about  stage mothers and a star kid who "memorizes to forget," wax-figured celebrities, sex behind the casting door, the airs of acting classes, movie-star hopefuls, the business of fame and Hollywood's general junky and seedy side.

Starving people
could eat awhile
on what this
nonsense represents

Here's another review in Pop Matters. As a junkie of pop and celebrity culture, I enjoyed both of these books.

If You Want to Write by Brenda Ueland is a book I thought was recommended to me in a recent writing workshop. But I found online various books with similar titles. I read the eBook version of this book at it was terrible, a mess of typos and format confusion, footnotes randomly placed inside of text, very messy, very hard to read. The book was full of overwriting, oversimplification and hypocrisy. Talking about how harmful it is to shut down writers with critiques of their work, followed by chapters of judgements about other writer's works.

But then I found out the book was old, like 1940s-old and that's why I was sensing a 1930s/40s mentality. The big clue was her rhapsody about Eleanor Roosevelt. Everything seemed so dated, especially her cry for women to stop doing housework and start to write. I don't know any modern women who do housework. Even those of us who clean occasionally.

I finally had to skip over the overly-long student examples. This was partly dated-badness; partly eBook badness. 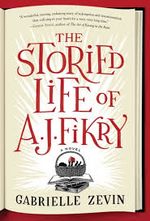 I did enjoy the new novel The Storied Life of A.J. Fikry by Gabrielle Zevin. This was a pleasant story about a small independent book owner and his obsessive love of books. And Fikry is unapologetically judgemental about the books he loves. He's a true snob but you like him even if you disagree with his harsh reviews of books and categories you love (like poetry). So what that the love story between him and the book publisher's publicist feels a little flat. It's just fun to sit in a small bookstore and talk about books for a short time.

There is one line in the book that applies to us directly: Fikry referrers to book jacket blurbs as "the blood diamonds of publishing.” So true.

Finally, the May/June issue of American Poetry Review has a great essay by Greg Wrenn on writing nature poems in a century of environmental destruction.