Is Reading Dead? Does Poetry Matter? Should Life Be Art? 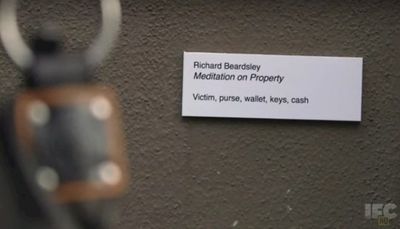 In the June 2014 issue of The Atlantic, there's an article blurb by William Deresiewicz that reminds me of some of the poetry essays I've been reading lately: "There is an idea in there somewhere, but it can’t escape the prose—the Byzantine syntax and Latinate diction, the rhetorical falls and grammatical stumbles"... the difference between "text that urges us ever onward" and text that like "boulders, say stop, go back.”

I also enjoyed a recent sketch from the show Portlandia about art overstepping the life boundary and how every celebrity and artist now seems to want to force the rest of us into the inescapable project of their own performance-piece-life. Watch the sketch here.

In Hector Tobar's piece called "Reading is Dead" from the LA Times,  Tobar comments on famous celebrity editor Tina Brown's insistence that reading is dead (because she doesn't read or that as an editor she failed to sell magazines). Tobar quotes a website commentator's frustration with people who declare everything dead:

“This week, a reader at the American Conservative (which also reproduced [Tina] Brown’s words), took to his or her keyboard and responded on the website’s comments section with a summary of all the “death” talk he or she’s been reading about lately:

Declaring things dead is so dead. And Tina Brown is a classic narcissist.

My friend Mary Anne sent me this article from The New York Times: "Poetry: Who Needs It?" by William Logan. Which reminds me, a friend of mine once gave me a book of reviews by William Logan and I think I lost it.

Anyway, Logan doesn't see the fact that most people don't have a need for poetry as indicative of disaster. He says most people are also "unlikely to attend a ballet, or spend an evening with a chamber-music quartet, or the latest exhibition of Georges de La Tour."

"A child taught to parse a sentence by Dickinson would have no trouble understanding Donald H. Rumsfeld’s known knowns and unknown unknowns.

In other news, the Academy of American is running a Poets Forum Oct 16-18. Read more here.

Posted at 03:08 PM in Poetic Realities, Think Outside the Lament, Whole Life of the Poet | Permalink