« Craft in May: Working with a Thesaurus | Main | Maya Angelou Passes Away »

Wisdom in the Magazines 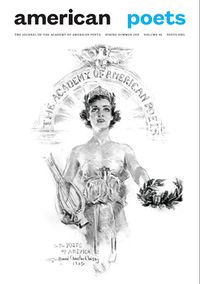 The Spring/Summer issue of American Poets (re-branded as plural)  arrived and is one of the best issues yet. Carolyn Forché has an essay about the poetry of witness that has a great last paragraph:

"Poets and artists are conversant with centuries of their kind, and their visions may address the most pressing need of the epoch: that of saving the biosphere of Earth. Poetry needs no other justification."

Alberto Rios talks about the role of the poet in our culture:

"I would like to use a curious word: surpriser. At their best, poets today do the old work of making the familiar new to us. But what I love is that it works, even now. It works. It is not a trick and I am changed by the ways poems and poets make me constantly re-see everything."

"Whether writing in traditional forms or exploding the language, taking an ironic stance or an optimistic one, focusing on the personal or the sociopolitical, the poet’s role is to fuse her or his feelings with the world’s ache and to speak in dignity with that doubled timbre."

I also caught up with the latest Copper Canyon Reader. Some favorite lines:

The gleam poured through my pupils
into this small, temporary body,
my wrinkled brain in its eggshell skull

"The ultimate aim of my writing is to create an environment of empathy, something that would allow the miracle of empathy to take place, where human beings can seem to rise out of themselves and extend themselves into others and live within others."

“There is no such thing as a final translation.”

It is not the dead who haunt us.
There is no further damage they can do.
We have seem them to death’s door.

It is the not-yet-born
we are up against.
They’ll be the first to forget us.

I'm still catching up on American Poetry Review but I did finish the March/April issue.

Stanley Moss uses the phrase "charge d’affaires" in a poem called “What.” This is odd because I had never heard that phrase before, even in years of French class. But I came across it months ago perusing Cher's latest concert program. This is the term she assigns her long-time entourage of girlfriends.

There's a very, very good essay by Martha Collins about why white people hesitate to write about issues of race. She talks about appropriation,  issues of invisibility (taking race for granted). She quotes Lynne Thompson who says, “white America has to come to grips with the same legacy as do African Americans.”

Collins says, "Deeper than the fear of appropriation is another fear. If the culture creates a sense that race is somehow not white people’s territory, that sense is reinforced by a fear of “getting it wrong” if we do enter the territory.

There's a good essay by Tony Hogaland (from his upcoming book) on the collage or composite poem. He says,

"Locating the poetry in worldly information, and implanting worldy information inside of poems, might not be easy, but if contemporary poetry is to claim the status of onging relevance it must interest itself in the stuff of mortgage crisis, insurgency sponsorship, and lithium batteries. Pitfalls of using too much or too little in your collage. Pitfalls of many and examples of good ones."

I recently started a subscription to Poets & Writers. TheMarch/April issue included a guide to off-the-beaten-path writing retreats. Aside from having an interesting vacation, I really question the value writing retreats provide considering their steep costs. The retreat lifestyle seems to just divide the haves and the have-nots.

Poets & Writers usually has good articles on international and exiled writers and interviews with agents. In this issue, Nate Pritts defends the sentimental in writing.

The May/June issue features a guide to free writing contests, but of the 96 listed, I qualified for zero.

Some interesting websites were featured:

Benka Banks explains why the Academy of American Poets has re-branded and there's an invaluable piece by Eleanor Henderson and Anna Solomon on the process, pains and pleasures of putting together an anthology including a nice list of Dos and Donts.