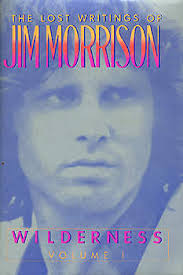 I'm very happy to be part of Savvy Verse & Wit's National Poetry Month blog tour this year. I'm going to spend the month reading celebrity poetry. If you check back to this post all month, I will be creating a master list of celebrity poets and reviewing my own books of celebrity poets.

I'll start with a recap of the books I've reviewed so far, some links to celebrity poems online, and a list of books you can buy if you decide to dive into this exciting world of celebrity profundity.

Jim Morrison is probably the best known celebrity poet (if you don't count the lyrics of Joni Mitchell and Bob Dylan). Read the full review here. I said basically,

Morrison is good at noticing what's going on around him. In this book he mulls over ideas of voyeurism and participation, film studies (he was a film student), issues of power and possession, alchemy, and a few interesting comments about motherhood. The random notes included are not fully formed. They seem almost like notes for future essays.  And many of the poems seem like a string fo terse images in search of a vague mythology...

In the end, Morrison seemed to view death as a clean slate, from "Hurricane & Eclipse" where he says, "I wish clean/death would come to me" to "If Only I" where he claims "If only I could feel/me pulling back/again/& feel embraced/by reality/again/I would gladly die." Maybe it's this very state of mind that appeals to teen boys, stressed out by the fog of adolescence and living a life not yet fully in control.

"Real poetry doesn't say anything,
it just ticks off the possibilities."

In my inaugural celebrity poet book review post, I reviewed Jewel, Suzanne Sommers and Jimmy Steart. Read the full reviews here. I waited a long time to score the Sommers book (before eBay came along) and I love it even thought the poems are a bit thin. Example:

I really didn't enjoy Jimmy Stewart's poetry. They were indulgent and better suited for a children's book. Exceprt:

from "I'm a Movie Camera"

I'm a movie camera. Instamatic is my name.
I'm Eastman's latest model,
Super 8's my claim to fame.
I was on a shelf in Westwood
when an actor purchased me
And took me home to 918 in Hills the Beverly. 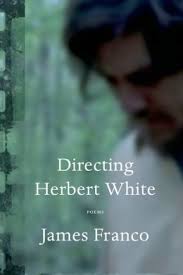 I finished Directing Herbert White by James Franco last week. I spent half the book thinking I had never seen a James Franco movie. I just knew him as a child-star-terror. Last week Entertainment Weekly called him out for calling The New York Times theater critic Ben Brantley a “little bitch” but EW added, “Don’t worry, he was in character as James Franco.” I was also considering judgments of family members of his disastrous award-show hosting with Anne Hathaway. Apparently he’s kind of a “little bitch” himself. But then I came upon the Wizard of Oz movie poem in his book and I realized I had seen in Oz The Great and Powerful. I became discombobulated then reading the book.

Some critics believe a poet’s biography should be irrelevant when you read a poem. I am not one of those. When I see James Franco’s paintings of Seth Rogen, I want to know if they are kidding or mean-spirited or I'll have no idea about tone. Poems are written by people, people with biographies. Your poems may not be about you entirely, but they are entirely not about anybody else either.

This book is better than the run-of-the-mill celebrity poetry. He has been published in American Poetry Review and has about 5 MFA degrees (in fiction, film, art and poetry…from NYU and Columbia among other colleges) and he has studied with well-known poets). Franco has definitely given service to poetry. He played Ginsberg in Howl and Hart Crane in The Broken Tower. He’s made his own short films about various works by Frank Bidart, Stephen Dobyns, Spencer Reece and C.K. Williams.

Some of the poems about Hollywood are good (two Lindsay Lohan poems, “Los Angeles Proverb,” the James Dean poem)- but “Acting Tips” is pretty self-involved, clichéd and empty—the last line being a telling indicator: “About me.”

The poem “Seventh Grade” is very good as is the poem about the LA River. The sonnets have a good tone and “Hart Crane’s Tomb" is probably the best poem in the collection.

In his poetry that when he said to the Brooklyn Bridge

“A bedlamite speeds to thy parapets,
Tilting there momentenly, shrill shirt ballooning,”

He meant himself,
A circle on the surface of the ocean,

For a second,
And then the bottom of the sea.

There are also interesting poems about Brad Renfro (the tragic kid from The Client) and Heath Ledger and two sections of poems titled by lyrics from song titles from the Smith’s compilation album.

That said often Franco works with a flat vocabulary and has issues with ending his poems with a punch. Some seem to almost mean something but fail to gain any depth. In the poem “Fake” he almost reaches self-awareness. The poems are mostly very colloquial and WYSIWYG but in occasional pieces are interestingly figurative. Franco is at his best when he brings out the theatrical performance aspect in the poem. 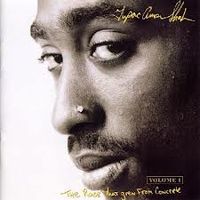 The Rose That Grew From Concrete by Tupac Shakur is a different book entirely that exists for a different purpose. There are an amazing amount of prematerial in the book: a a preface, a forward and an introduction. The father’s preface is moving and the forward by Nikki Giovanni is a little hyperbolic in its attempts to give Tupac poet's cred, but she does draw out some of the importance in his song lyrics and makes a good argument about how black activists and artists are turned into thugs by the press or worse, ignored.

The book is tiny. Each page has the poem and the hand-written version on the page opposite. I had to wonder if Tupac ever intended these poems to be published. They were written in workshops and were published unedited and are mostly expressions of frustration and heartache, sounding like so much teen angst. Tupac makes use of numbers and symbols in place of words like old Price lyrics. Some poems rhyme. But he argues points on issues of race and class and the struggles of fame. He had his own celebrity obsessions with Marilyn Monroe and Vincent Van Gogh. The book is also sprinkled with publicity photos. The biggest section is of love poems which seem private and naïve. There are also political sections which deal with Nelson Mandela, the Black Panthers and the American welfare system. There are some moving mother poems.

The book goes a long way to presenting an alternate view of Tupac. He seems to be working out his life’s sufferings and joys. My favorite poem is “Pride in the Panther”

The final poem is absolutely haunting, a piece called “In the Event of My Demise.” There is no translation for it and you read the poem in his own handwriting. He was hoping to die for a principle. It’s a tragedy he did not.

I like that Tupac's parents are using his poems in service of young adult programs.

It's easy to make fun of celebrity poetry but they've committed no crime except taking advantage of their fame to publish poetry. Is that so bad? Taking up space from non-famous poets maybe but if you were famous, would you stop writing poetry? (Assuming you're a non-famous writer today). Everyone is on their own journey. Don't hate them because they love poetry. Some celebrity poets, like Leonard Cohen and Joni Mitchell are actually very good.

I plan on reading Morrison's book of poem this month! How ironic. I don't think it is bad that celebrities take advantage and publish their poems -- I just prefer that they be good ones. I'm curious about Franco's work, since some interviews I've read with him are overly confusing....his answers tend to be very convoluted.

I agree...better they be good. I also try to accept the poems in the spirit they were intended. If they're meant for YA or kids...then that's another criteria. I came across one of Franco's poems in American Poetry Review...so I'm expecting a lot from him!