« My Poet Ancestor's Miracle Poem | Main | May Craft: A Book of Fragments About the Mind of Poetry » 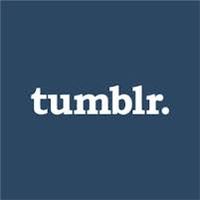 Last year in my Big Bang Poetry newsletter, I sent out an article about how Tumblr was the up-and-coming social media player for young people. Facebook and Twitter are skewing more for old folks.

Because I care about reaching people younger than myself, I dutifully set up a Tumblr page. My page was pretty static with only basic information about how to link to my blogs and other web sites.

I was surprised a few months ago when I started getting a steady stream of new followers. Not just a few but like 40 followers in two months. I was confused about the activity but decided to create a new section of the Tumblr page for updates. I figured if people wanted to connect with me on Tumblr, I should update it more often.

However, something seemed a little off. The icons (pictures) of the new followers...well they didn’t look right. Let’s just say they looked more like someone you’d come across at a club on the Sunset Strip than someone you would run into at a poetry reading (or a Cher fan for that matter).

Imagine their dismay at all my poetry posts and Cher updates!