« Saturday Moment of Craft: Thought as Ordering | Main | A Book About the Philosophy of Writing Poetry »

Last week I went to Phoenix to see the opening show of Cher's Dressed to Kill tour. While Monsieur Big Bang and I were there we flipped through the channels of our hotel's cable and stumbled upon RT TV or Russia Today. Similar to CNN, this cable news station is apparently gaining popularity in the US. According to Wikipedia, "In 2011 it was the second most-watched foreign news channel in the U.S. after BBC World News."

As we tuned in, the show airing referred to RT as "radical thought" and first aired a soapbox video from a gun advocate and his suspicions about the US government. That was followed by the "spoken word artist" Jamie Dunmore reading an environmental poem called "My Call to Humanity" in full and live on the program. I was stunned at how much airtime this show gave him. And then, as if that wasn't radical enough, they interviewed him about his thoughts on how to challenge government propaganda and consumerism! Crazy!

When I came home from seeing Cher in Phoenix, I immediately had started a week of nightshift work supporting the website of ICANN during their Singapore meeting. To keep myself awake, I watched crime shows like Snapped or anything on ID network, or, if Monsieur Big Bang is up, we like to watch ghost shows.

I must say, I'm not always convinced these shows find any ghostly evidence. I think most of what spooks us can be explained by normal events. The rest is either wishful seeking or will explained some day by future scientific discoveries. That is not to say I don't believe in life after death or ghosts per se. I am just not convinced these shows have found the chatty corpse. However, I am addicted to these shows nonetheless.

I'm fascinated by what spooks us and am  fascinated by a good old ghost story, the ability to tell a story that seizes the heart of the listener and manipulates their fears. There's a craft to it.

So I was thrilled last night when I came upon an episode of Ghost Adventures from Season 7 in 2012 called "Tor House." The house was built in Carmel, California, by poet Robinson Jeffers and show spends a good portion of the beginning with readings of Jeffers' poetry, particularly as it relates to the location and his theories about ghosts.

They read his poem "The Ghost" in full at the top of the show.

There is a jaggle of masonry here, on a small hill
Above the gray-mouthed Pacific, cottages and a thick-walled tower, all made of rough sea rock
And Portland cement. I imagine, fifty years from now,
A mist-gray figure moping about this place in mad moonlight, examining
the mortar-joints, pawing the
Parasite ivy: "Does the place stand? How did it take that last earthquake?" Then someone comes
From the house-door, taking a poodle for his bedtime walk. The dog snarls and retreats; the man
Stands rigid, saying "Who are you? What are you doing here?" "Nothing to hurt you," it answers, "I am just looking
At the walls that I built. I see that you have played hell
With the trees that I planted." "There has to be room for people," he answers. "My God," he says, "That still!" 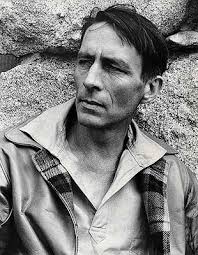 experienced during their production of the episode, which is the 50th anniversary of his death at the house in 1962.

This is one of many favorite uses, among many, of poetry: going beyond aesthetics to mine poetry for practical information based on a topic, in this case ghosts.

The show's participants sat around a table and thumbed through Jeffers' books of poetry, asking questions and looking for clues to his theories about the paranormal, particularly his Stone Tape Theory which they describe and find evidence of in his poem called "Carmel Point"

The extraordinary patience of things!
This beautiful place defaced with a crop of suburban houses—
How beautiful when we first beheld it,
Unbroken field of poppy and lupin walled with clean cliffs;
No intrusion but two or three horses pasturing,
Or a few milch cows rubbing their flanks on the outcrop rock-heads—
Now the spoiler has come: does it care?
Not faintly. It has all time. It knows the people are a tide
That swells and in time will ebb, and all
Their works dissolve. Meanwhile the image of the pristine beauty
Lives in the very grain of the granite,
Safe as the endless ocean that climbs our cliff.—As for us:
We must uncenter our minds from ourselves;
We must unhumanize our views a little, and become confident
As the rock and ocean that we were made from.

Particularly they focus on the line "lives in the very grain of the granite." They also find something in the poem "Granite and Cypress."

Then they do a full, dramatic "on location" reading of the poem "Inscription for the Gravestone." Their shared performance of the poem are both funny and moving. I'm amazied just that they are doing it!

In discussing his death bed, they read from "The Bed by the Window."

I chose the bed downstairs by the sea-window for a good death-bed
When we built the house, it is ready waiting,
Unused unless by some guest in a twelvemonth, who hardly suspects
Its latter purpose. I often regard it,
With neither dislike nor desire; rather with both, so equalled
That they kill each other and a crystalline interest
Remains alone. We are safe to finish what we have to finish;
And then it will sound rather like music
When the patient daemon behind the screen of sea-rock and sky
Thumps with his staff, and calls thrice: 'Come, Jeffers.'

Then they interview the staff. Archivist/writer Joan (Meyers) Hendrickson tells of a ghostly experience she had where she heard keys jangling in the lock and saw an apparition cross a room to a window. She wrote a poem about the experience called "Revenant" which she reads on the show. I loved her line, "the long deceased stone mason come to visit the reliquary that held his heart".

Like all ghost shows, this one finds random, non sequitur EVPs (electronic voice phenomena) and possibly a video apparition outside Hawk Tower which could be explained by video calibration. They do debunk some orbs and the humming of a piano wires which occurs when the host starts to talk too loud.

You get a tour of the beautiful grounds of Tor House and the coast of California and learn a bit about Robinson and his mystic-wife Una. You see the artifacts of his life including his writing desk. It was like visiting a writers house on Book TV but with an EVP recorder and a SB7 spirit box.